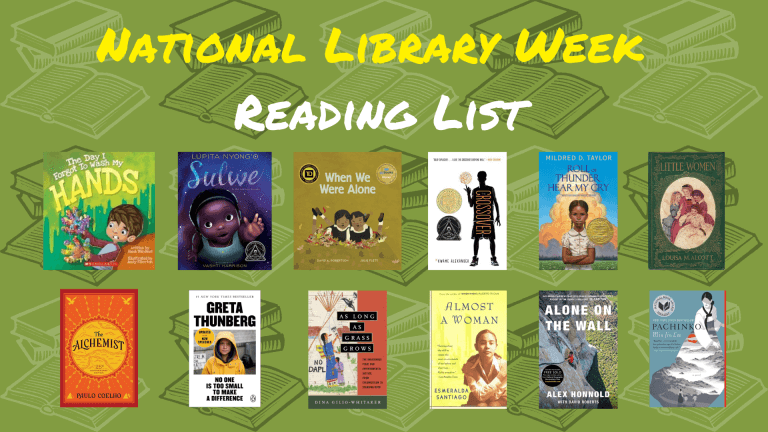 April 3 to April 9 is National Library Week! And this year’s theme is, “Connect with Your Library!” In an effort to promote the idea that libraries are places to get connected to technology, resources, and books, the National Library Association (NLA) hopes this year’s celebration offers an opportunity for all to visit and engage with their local library.

There is no better way to celebrate National Library Week than by exploring the wonderful world of stories! Here is a book list, filled with classics, timely tales, and reads that you should consider for storytime! Celebrate with us and the NLA by hopping into a book and supporting your local library!

The Day I Forgot to Wash My Hands by Anna W. Bardaus

From Scholastic: The fun visuals that depict germs on dirty hands serve a valuable lesson for students to develop and maintain healthy habits. The rhyming text and illustrations in this hilarious picture book also hold their attention. Additionally, it allows them to make real-world connections, sharpen comprehension, and meet their reading goals.

From Simon and Schuster: From Academy Award-winning actress Lupita Nyong’o comes a powerful, moving picture book. Sulwe is about colorism, self-esteem, and learning that true beauty comes from within. Sulwe has skin the color of midnight. She is darker than everyone in her family. Sulwe just wants to be beautiful and bright, like her mother and sister. Then a magical journey in the night sky opens her eyes and changes everything.

When We Were Alone by David A. Robertson

From Bookshop.org: A young girl notices things about her grandmother that make her curious. Why does her grandmother have long, braided hair and beautifully colored clothing? Why does she speak Cree and spend so much time with her family? As she asks questions, her grandmother shares her experiences in a residential school, when all of these things were taken.

The Crossover by Kwame Alexander

From Amazon: Josh Bell and his twin brother Jordan are awesome on the court. But Josh has more than basketball in his blood, he’s got mad beats, too, that tell his family’s story in verse. The two brothers must come to grips with growing up on and off the court to realize breaking the rules comes at a terrible price, as their story’s heart-stopping climax proves a game-changer for the entire family.

Roll of Thunder, Hear My Cry by Mildred D. Taylor

From GoodReads: Why is the land so important to Cassie’s family? It takes the events of one turbulent year to show Cassie that having a place of their own is the Logan family’s lifeblood. It is the land that gives the Logans their courage and pride. No matter how others may degrade them, the Logans possess something no one can take away.

Little Women by Louisa May Alcott

From GoodReads: Generations of readers young and old have fallen in love with the March sisters of Louisa May Alcott’s most enduring novel, Little Women. The March sisters are united in their devotion to each other and their struggles to survive during the Civil War. Little Women explores such timeless themes as love and death, war and peace, personal ambition and family responsibilities, and the clash of cultures.

The Alchemist by Paulo Coelho

From Scattered Books: An Andalusian shepherd boy travels from his homeland (Spain) to the Egyptian desert in search of a treasure buried in the Pyramids. He is both a simple sheepherder and an ambitious explorer. He follows his dreams as well as “signs” from his environment.

Lush, evocative, and full of awesome quotes about being, the story of Santiago is a real (and slightly magical) representation of the transforming power of our dreams and the importance of listening to our hearts.

As Long as Grass Grows: The Indigenous Fight for Environmental Justice, From Colonization to Standing Rock by Dina Gilio-Whitaker

From Penguin Random House: This is a story of Native peoples’ resistance to environmental injustice and land incursions.  Through the lens of “Indigenized environmental justice,” Dina Gilio-Whitaker explores the history of treaty violations, struggles for food and water security, and protection of sacred sites.

From Penguin Random House: ‘We are the change and change is coming.’ In August 2018 a fifteen-year-old Swedish girl, Greta Thunberg, decided not to go to school one day. A year later, more than seven million people around the world joined her strike. This is the record of a game-changing year in the fight against the climate crisis.

No One Is Too Small to Make A Difference is a rallying cry for why we must all wake up and fight to protect the living planet, no matter how powerless we feel.

Almost a Woman by Esmeralda Santiago

From Amazon: “Negi,” as Santiago’s family affectionately calls her, leaves rural Macún in 1961 to live in a three-room tenement apartment with seven young siblings, her grandmother, and a strict mother. At thirteen, Negi yearns for her own bed, privacy, and a life with her father, who remains in Puerto Rico. Translating for Mami at the welfare office, starring as Cleopatra at New York’s prestigious Performing Arts High School, and dancing salsa all night, she yearns to find a balance between being American and being Puerto Rican.

Alone on the Wall by Alex Honnold, David Roberts (Editor)

From Barnes and Noble: On June 3rd, 2017, Alex Honnold became the first person to free solo Yosemite’s El Capitan—to scale the wall without rope, a partner, or any protective gear. This feat is described by many as “the greatest feat of pure rock climbing in the history of the sport.”

Alone on the Wall recounts the most astonishing achievements of Honnold’s extraordinary life and career and is brimming with lessons on living fearlessly.

From GoodReads: Teenaged Sunja, the adored daughter of a crippled fisherman, falls for a wealthy stranger near her home in Korea. But when she discovers her lover is married, Sunja refuses to be bought. She accepts an offer of marriage from a gentle, sickly minister passing through on his way to Japan. Her decisions set off a dramatic saga that will echo down through the generations.

Do you have a favorite book that we may have missed?

Send them to moments@achievementfirst.org and we’ll add them to a future list! If you need more books to explore, check out these stories during the spring and books by female authors.