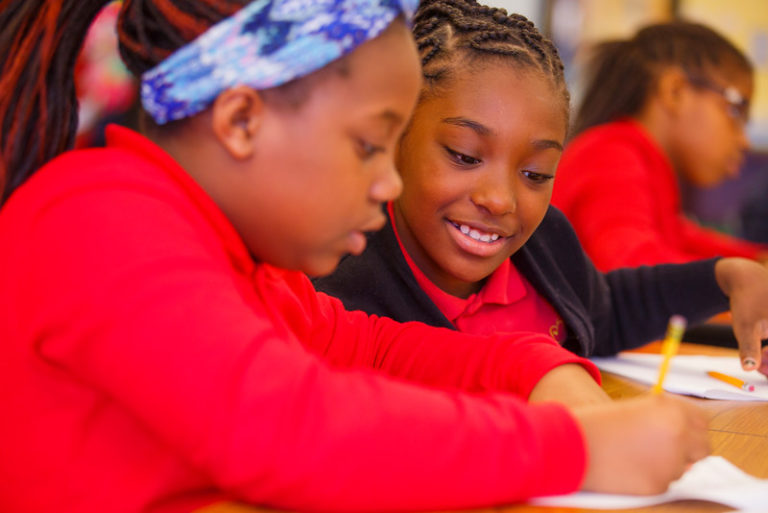 As we continue to reflect on our results from last year, we’re seeing glowing highlights across our network. This month, we’re shining the spotlight on just a few of these bright spots. Last week, we took a closer look at AF Bushwick Middle and AF East New York Middle. Next, we’re heading north to Connecticut and Rhode Island. First stop – Hartford!

On the SBAC, AF Hartford Academy Elementary grew 23% points year-over-year, the strongest growth among AF’s Connecticut schools. And overall, the school exceeded the district by 53% points.

These results tell an exciting story of determination and potential. But there’s more to it than just numbers. To bring you the stories of the teachers and students working hard to achieve these results, we sat down with the school’s principal, Kerri-Ann T. Thomas.

Where were you when you learned about your state test results? Who was the first person you called or texted?

I knew they were coming shortly, so I was in my office waiting and praying!  The first person I called was my ELA dean, Colleen. I couldn’t contain my excitement, so I told her to come to my office ASAP. We cried because we received validation that our risk-taking move to Hartford was worth it. We made history with the school’s strongest performance. I truly felt blessed to be a part of the change. And I say “a part” because I did not do this alone. I did this with 6 leadership team members, 33 teachers, 6 teachers-in residence, 7 paraprofessionals and 4 culture support team members. It was truly a team effort.

Can you share a story that speaks to the level of commitment a specific student had in preparing for the test?

There are so many, but one story that sticks out is the story of Alysse. Alysse didn’t score very well on our first IA. After she received her data, she put in the WORK to change her scores, and she did. She completed extra packets, joined tutoring and produced top-quality homework. And the IA was the last time she didn’t score well!

What about a teacher who just stuck it out and demonstrated ambitious persistence?

There are several, but I must highlight Jenika Mullen, our third grade math teacher. She moved with me from AF Endeavor in Brooklyn, where she taught kindergarten and second grade reading and writing. When I asked her to move with me, she said “ok” with no hesitation. When I told her she would be teaching third grade math, she said “ok” with no hesitation. She didn’t hesitate because she trusted in me as a leader, and she stuck with me through a very challenging year. As the year went on, I know she missed being home in New York, but she never once thought about leaving until her mission was completed. Well, mission accomplished, Jenika!

It would be “Juicy” by Biggie. I select this song, not only because I’m from Brooklyn, but also because the first line in the song says: “It was all a dream, I used to read Word Up magazine.” This symbolizes reflecting on when things weren’t good and when people doubted your ability. I think a lot of people doubted what I could do, what Hartford could do, and within one year, we turned the school around. It started with just a vision of doing so, and now it’s a reality.