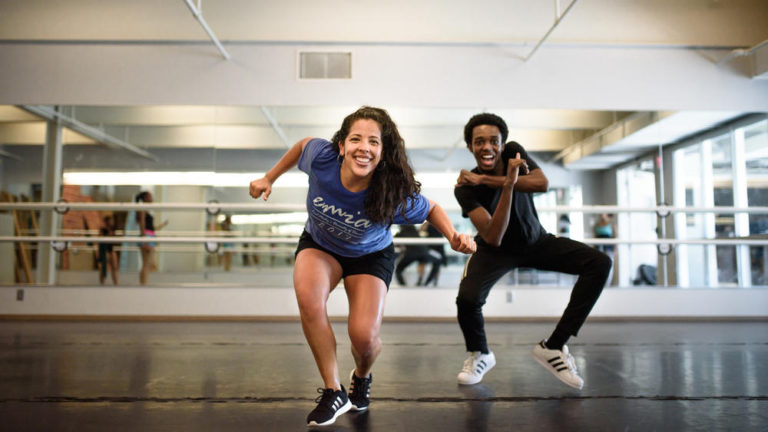 This article originally appeared in the Hartford Courant.

Edwin Rodriguez did not need to see much of Gabriel Francis’ dancing to know he would be an optimal fit for his production.

Rodriguez, an instructor at Earl Mosley’s Institute of the Arts “Diversity of Dance” program, said Francis was one of the first students he chose for his choreographed piece because he was “not afraid to jump right in” learning different types of dance styles.

“He came in hungry and ready to dance,” Rodriguez said.

Already well-versed in hip-hop and other genres, Francis, 19, a resident of Hartford’s North End, said he joined the program to add to his versatility as a dancer.

“I’ve been learning a lot of new styles … so I feel like these other two things that can help me with those areas of hip-hop … can help me develop in other areas of dance,” he said.

Outside of participating in the EMIA program, Francis dances and competes with local groups in Hartford, “Team 860” and “860 Elite Squad” at Studio 860 on Farmington Avenue. Studio 860 Artistic Director Jolet Creary recommended that Francis participate in the program this year, Francis said.

Francis has performed in Boston, Atlanta, Philadelphia and Washington D.C. in only four years of what he calls “real dancing,” including taking classes to better his craft. Before then, he was a self-taught dancer taking inspiration from YouTube videos and his sister, a self-taught former dancer herself, he said.

The rigor of the EMIA dance program, however, would set a foundation for Francis to take his talents to the next level.

The EMIA dance program, founded by renowned dancer and instructor Frederick Earl Mosley, focuses on developing youth between the ages of 14 and 20 in ballet and contemporary dance during intensive two-week sessions in the month of July. Students have the option to participate in one of the sessions or stay for the entire four weeks.

Their work culminates with live performances each Saturday night during the program that are open to the public at the Marvelwood School in Kent where they have been training.

For Francis, this has meant a daily regimen of stretching, rehearsing and various workshops to bring his dancing to the next level since he arrived for the first session on July 2.

Development is a crucial aspect of the EMIA dance program for students, no matter their level of experience, assistant director Sheryl Pollard Thomas said, and it is not limited to their moves on the stage.

Gabriel Francis dances with Connecticut native dance teacher, Lauren MacAllister, as he attends the Earl Mosley Institute of Arts “Diversity of Dance” intensive program in Kent, Connecticut, for the first time. The 19-year-old dancer is a hip-hop based artist from the north end of Hartford, Connecticut.

“We try to incorporate as much professional development and personal development [as possible] so the students can feel safe within themselves and safe to communicate what they may be going through, what they’re feeling and just to be honest,” she said.

The program, meanwhile, looks to build the confidence of its participants and create meaningful connections with leaders in the dance industry, she said.

“This is a big networking campus,” said Pollard Thomas. “I would say half of the students have found some type of connection with a guest artist, the teachers, definitely Mr. Mosley.”

Francis, going from a hip-hop background to a ballet and contemporary dance program, said he was not stigmatized by his friends for joining the program. He was not the first from Studio 860 to join the EMIA dance program.

It was a change from what he was used to, however.

“I had to get ballet slippers, which I’ve never worn a day in my life. I had to get tights, I had to get a dance belt, and they fit really weird,” he said of his preparation for his audition in March.

Francis said his family has been enthusiastic about his efforts as a dancer, supporting him along his journey. He said he hopes to have significant progress to bring back to Hartford and his teams.

“My family is very supportive of me dancing and just being a male dancer in general,” he said. “Somehow they did it, and they just [made] a lot of sacrifices for me to come here.”

Francis, a graduate of Achievement First Hartford High School, will attend Central Connecticut State University for dance education in the fall. He is content with being a backup dancer, but he said he would also like to teach and “be certified.”

“I just see myself dancing and choreographing and teaching in the future,” he said. “I like being a sponge. I like taking in a bunch of different information and movement and try to make it my own.”

Whichever he decides, Rodriguez said he has no doubt Francis will be successful.

“If EMIA offered me, in the future, [the opportunity] to come back and teach … I would do that. I feel like that would be really cool.” Francis said.