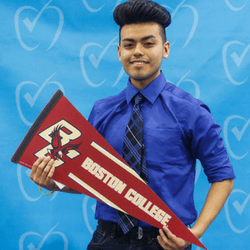 Jose is a graduate of Achievement First Amistad High School.

The most inspirational people in my life are from a story that started about 50 years ago. One of these individuals never went to college and the other dropped out of college.

One of the two people I’m mentioning is the oldest brother in his family—my dad. He grew up in a loving family, but his family could only provide so much. One day his family took a large risk by putting aside money for him to get a one-way ticket to America. He immigrated to the United States working long hours over multiple shifts as he balanced two jobs for a couple years without a car or means of transportation. One time he traveled five miles on foot during a snowstorm—because he knew the money he earned wasn’t just for him, but for his family. He knew what family meant and that pushed him to persevere.

The other individual who was an inspiration to me grew up living in a home with nine that wasn’t the safest—it wasn’t secure and anyone could almost come in. This was my mother’s scenario as she slept on a hard, solid cement floor most of her time growing up. She had little access to electricity. It changed when she had her one-way ticket to America, of course. At times, she would work her job for a total of 50 hours a week under horrible factory conditions to collect the money needed to support herself and her family back home.

Fast forward a couple of years into the future and they were waking up very early every day for work. They found a way to cook all their meals and continually sacrifice their own time again and again so that their three children could succeed in this world. For making all things possible, I want to personally thank them. Thank you, mom and dad.

I will make sure all the backache, hand damage, and foot pain you went through as you supported Alex, Franschesca, and I to where we are today, was all worth it. I will prove it wasn’t a waste of 18 years. And, I will prove they raised a boy they will always be proud to call their son.

As a student at Achievement First, I put in long hours during and after school. I found myself with less free time, but by the end of my senior year at Amistad, I’m proud to say after the all the rigorous time I put in means I’ll be attending a competitive university for the next four years.

I will continue to honor and stay true to my roots in the fall of 2018 when I attend Boston College!

This post was originally published by the National Alliance for Public Charter Schools for their celebration of #CharterGrads.