Being a Woman Who Pushes Forward: A Scholar’s Story 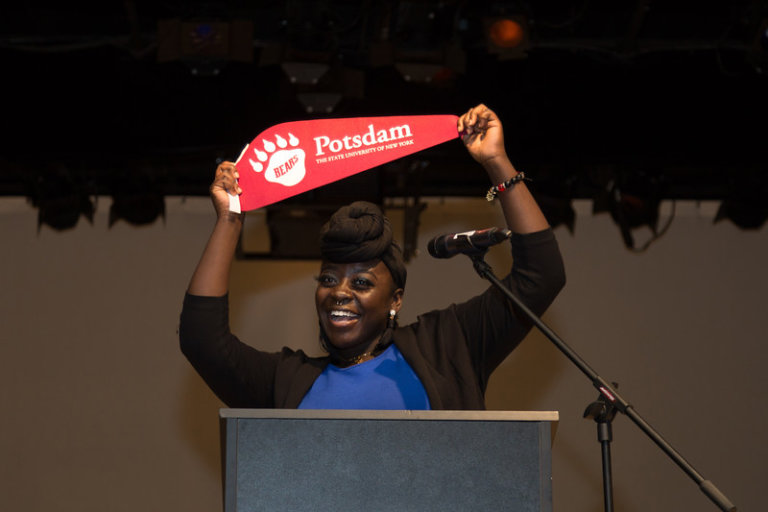 Jessica is a member of the AF University Prep High Class of 2019. Below is a portion of the speech she delivered on Senior Signing Day.

I first became a “social justice warrior” in fifth grade. It was Black History Month and we were talking about the same three people, again. MLK. Rosa Parks. Harriet Tubman. The same cliché, black routine. But what about Malcolm X? Assata Shakur? I wanted to scream. But back then I was a quiet, weird girl without friends to listen to my rants. So what did I do? I wrote. I wrote and wrote and wrote. I wrote about black womanhood, about depression, about oppression, about broken systems.

My writing turned into little poems, and the poems soon expanded into the declamations and spoken word pieces you’ve all heard from me over the years. But of course, it seems like all I’ve been doing is talking. That I just get mad and loud and bash the corrupt White man. But I assure you, that has changed. I am ready to stop talking and start doing. Yes, I’m still angry, there is still corruption, and we have a long way to go. But the beautiful people in my life, three in particular, have pushed me to seek action. They have been the battery in my back that charged me forward more than just talk, but to effect change.

My little brother, Josiah, you are my motivation, knowing you are around, needing someone to look up to gives me the energy to keep going. Jazmine, one of my greatest supporters, you’ve always given me the criticism and the faith I needed to continue improving, I could never ask for a better cousin. And my best friend Nwamakah, You push me beyond where I want to go, you’ve watched me cry, laugh, scream, and shut down and you’ve never given up on me. These three, along with the family I’ve been born into and the family I’ve created have kept me going to become the woman who pushes forward instead of stagnating back. And that’s what I want for all of us.

Class of 2019, we’ve made it so far. Yes, we scored high on the tests, crushed debates, and wrote some of the greatest rhetorical analysis essays (thanks to Ms. Bouchard), but what about outside of the classroom? How are we going to strengthen our sense of self? Our character?

We still got a long way to go.

Solomon Short best said it: “Half of being smart is knowing what you are dumb about”. Let’s figure out what we’re dumb about. Let’s have discernment. Stay humble. Learn what we don’t know, explore. Find out what we don’t like, what we hate, and most of all, what we love.We can never stop learning because we will NEVER know enough.

But also, let’s have discernment surrounding our safety, especially as brown and black bodies. We are targets. WE are threats. And not because we carry guns and drugs and hang by the corners. Not because we wear hoodies or walk suspiciously. But because we know how powerful our brains are. We know how much electricity runs through our blood, how much potential we have, how much we are capable of. I’m asking you to be aware. Of yourself. Of your purpose. Of your surroundings. Stay on your toes. Update your mind, broaden your scope.

For four years I’ve planned, I’ve discussed, debated, and argued my view in politics and social justice. I’ve moved so many with spoken word, with my poetry, with my mind. But it is about time I stopped talking and start doing. And with that being said, I will learn more about the system, take into account the entirety of our government so that I can represent our community with a spine made of justice in the fall of 2019 as I attend SUNY Potsdam!