Transitioning at School: A Teacher's Story 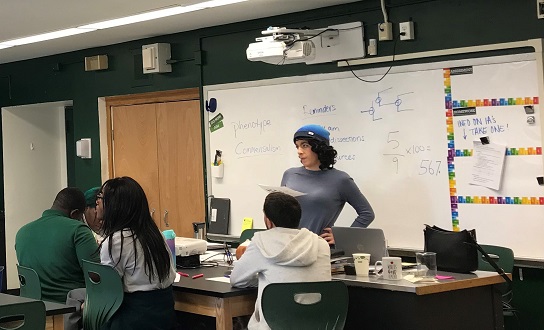 We sat down with Brielle Hoban to learn more about her teaching journey and her experience coming out as transgender at her school.

What are you teaching, and what brought you to Achievement First?

I’m teaching 11th grade biology at AF East Brooklyn High. I moved to New York from Pittsburgh in August. Before becoming a teacher, I was in nursing, and I always loved science.

My favorite part of nursing was educating people. When I did my clinical rotation, it was a great first teaching experience. On the OB-GYN floor, one thing I was in charge of was teaching fathers about aftercare. I fell in love with teaching patients, so I went back and got a degree in secondary science education.

You recently shared with your school and your students about being transgender. How did you decide that you wanted to share that part of your identity with your team and scholars?

I came into the school with the wrong approach—I was really nervous. I completely omitted that part of my life, and I tried to position the most digestible part of myself. I realized that it wasn’t in the best interest of my success or my students’. I’d already been taking hormones since April, and this was in October that I started thinking I wanted to talk to my school.

I told my principal first and asked for the opportunity to speak to the team. She was supportive and let me direct the conversation. We decided to do it on a PD day when our discussion was already going to be about intersectionality. 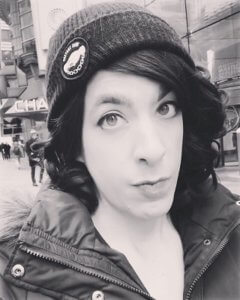 How did it go?

I came at it in a personal way and in the mindset of an educator. I said that I identify as transgender and that means I have a gender identity that doesn’t align with the sex assigned at birth, and I’d been taking hormones to better align my body with how I see myself. I printed info sheets that I called Dysphoria Fast Facts—I left them in the teacher workroom for people to take if they had questions later or wanted to know more.

I think it went well—I was shaken, but everyone else was supportive in listening. A lot of people used the fact sheet as a spring board for conversations with me after.

My class is biology, and I used that framing to talk to scholars. On Fridays, I start class with “the Friday Share” for my scholars and me to get to know each other better.

That conversation was much less academic, and the scholars actually had more of a frame of reference than the teachers did. I told them I needed to share something that I should’ve shared before. As I got to know them better, I’d become more comfortable talking about deeper parts of myself. It was more conversational—I said the way I feel on the inside is different than what I look like on the outside.

I wanted to give them the space to ask whatever they wanted, so we did a Q&A. I also gave them two notecards for anonymously asking questions in class or for following up by placing them in the homework box.

The notecards were mostly really encouraging messages. Some were questions, like “have you been bullied?” I talked about how things with my family have been difficult. One scholar wrote “don’t worry about your family; you’ve got a new family now.”

I told scholars that after Winter Break, I’d come back looking pretty different. I remember saying, “What does this mean for us? Nothing. I’m still your teacher, you’re still my kids.”

Why was it important to you to share about being trans?

A scholar came to me and confided in me that they’re also struggling with gender dysphoria. Even though they hadn’t known me previously, they felt like there was no one else they could talk to about it. One of the first things I asked was if there were different pronouns or another name they wanted to use. They shared about their feelings and struggles, and they started coming to GSA (which I also run).

I remember them asking me why I did it, and wouldn’t it have been easier to be more private about it? And I said to them, “this is exactly why.”

If I was afraid or didn’t want to make connections, I’d have a job in a cubicle. One reason I’m doing it so publicly is because it benefits people. Anything negative is outweighed by even just one person coming to me.

If you could go back and give yourself advice about the process, what would you share?

I moved to New York three days before school started, so I had no time. I decided to be secretive, but I regret it now. At the time, I had a lot of fear from other things going on in my life. I didn’t know people. I wish I was more bold to just do it when I got here, but I don’t know that I could’ve done it in such a relational way. The way I did it worked.

Are there things that you’d like to see more schools do to be inclusive for trans teachers and students?

The teachers have single stall bathrooms with keys, but there isn’t a gender neutral bathroom for scholars.

Also, there’s not really a protocol for what to do. I’m very involved and mindful of thinking about what systems could be in place to help someone going through this in the future. I’d also love to see a formal training, and trans issues could be explored in classes—it would be an important thing for curriculum in health class.

I’d love to see a system in place to inform families. I feel supported personally, but we need a better system for the scholars and their parents.

Something they don’t tell you about transitioning is that while I’m the one doing it, I’m also pulling the ones close to me into it, too. They’ve had to change their perceptions of me, and how they think about me in their heads. I’m not going to pretend it’s not difficult. I’m always open to feedback and questions.

As part of the trans community, I’ve heard from others that some of the biggest struggles are housing and employment. It’s profound to me, that even in NY where I’ve transitioned, how much discrimination is out there. AF East Brooklyn High has proven to be my most supportive environment. I’ve never felt more safe than when I’m at work. It shows the strength of our culture. People have been supportive even if they don’t agree, and they’re making the effort to understand it. And that’s not what I expected. I operated out of fear—what will happen when people know? But I’m glad I did it, and it’s made me able to support others.

I’d like to extend an offer—I’m willing to support people who may be in a similar situation. If you’re looking for someone to talk to, please feel free to email me.

Wow, thank you! That’s such a generous offer. We appreciate your vulnerability and honesty in sharing your story.