My Black Teachers And I 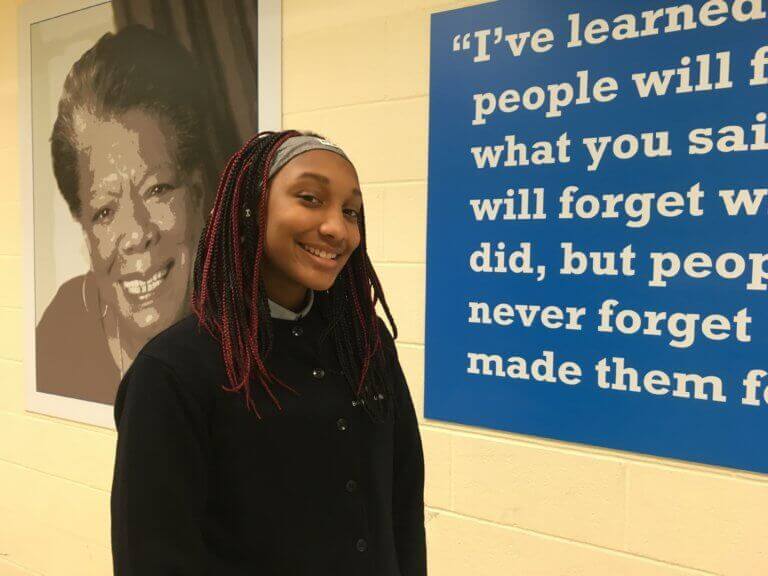 Shaliyah is an 8th grader at AF Bridgeport Academy Middle.

When I was growing up in New York, I saw only two black teachers the whole time. I remember both of their names. They stood out because they were the ones that I could look at and see myself. That helped a little in a school where I always felt like people were looking at me for my color and where I come from, and thinking I would never make it. They were wrong.

A few years ago, I moved to Bridgeport and when I was in fifth grade, I started going to Achievement First Bridgeport Academy Middle School. It changed my whole perspective. And that’s not only because we’re a school that does really well academically. It’s because here, I have teachers who are the same color as me. What does it mean to go to a school like that?

It means I have a black principal who will wear shirts that celebrate our culture. It means I have other teachers who will wear dashikis. There are quotes from African-American leaders all over the walls. My favorite is from Maya Angelou. Because of our diversity, all of our teachers, whatever color they are, respect who we are and bring such a positive energy. February is not really different here because we celebrate and learn about black history every month.

It means I have a teacher named Ms. Felicia Gee, who tells us about how she was born in Bridgeport and no one thought she was going to make it. We see her really making it big, and that inspires us when people say we’re not going anywhere because we’re from “the hood.” So does another thing Ms. Gee says when she starts each science class telling us about a leader of color in science—she says she will never stop showing her blackness, because at one point we couldn’t. That’s part of why I love to embrace who I am, and why I love science and math – even though they’re so difficult – because a lot of people don’t think people of our color can be good at them, and we can be.

I heard about the report from ConnCAN that showed AF Bridgeport Academy has the second-most diverse teaching staff in Connecticut and I felt so grateful, but also sad. I felt sad because that same report also said that barely any districts in the whole state had at least 15 percent educators of color.

This piece was originally published in the Connecticut Post.