Acting and Activism: A Scholar's Story 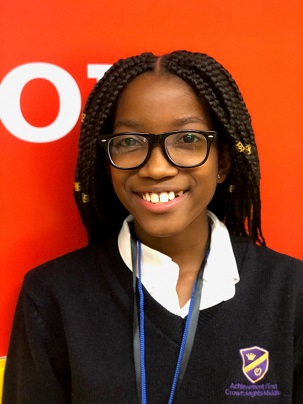 Rihana, a scholar at AF Crown Heights Middle, has been the voice of Win Your Week since March, and she does other projects for Nickelodeon, too. Not only is she a talented actress, but she’s also an activist. We sat down with her to learn more about her acting and how she’s getting involved with important issues.

It’s a pleasure to chat with you today, Rihana! Tell us about yourself.

I’m 13 years old, and I’m in eighth grade. My favorite subject would have to be math. Everything is factual. The answer is the answer. We’re currently doing algebra, things like linear functions and ordered pairs. I like math and always have. My mom was the principal of a school when I was little. The minute I was old enough to go with my mom, she would take me with her, and I would sit in the pre-K classroom. The kids were older than me, so I was learning with them at their level. I’ve been in love with Math since then.

We hear you’re an actor! How did you get started?

I’m the youngest in my family. My dad is a mechanical engineer, my mom is a biologist, my sister is going to work for Chrysler, and my brother goes to AF Brooklyn High and probably wants to do marine biology. They’re all in science and engineering. Even though I like math, I thought that’s what I had to do because that’s what my family does. My mom helped me realize that it’s okay to want to do something different than my family.

When I was little, I used to put on plays at home, and my mom signed me up for some plays at church starting when I was five. Someone saw me perform and told my mom about a Christian organization that trains you in acting and then hosts a showcase so you can meet with different agents, and they decide if they want to represent you. One of the agents gave me a callback, and I liked them because a lot of their clients had been on Disney, so I signed with them. Now I do Nickelodeon shows, which I love. My agency sends me on auditions.

That’s so cool! Can you share more about some of the work you’ve done? 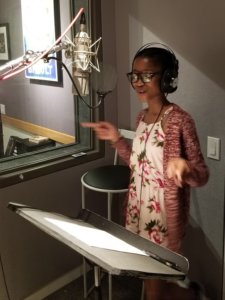 Rihana in the recording studio.

I was on an episode of “The Mysteries of Laura.” I got to meet Debra Messing – she’s so nice. The actors are very nice and down to earth. They include you even if you’re not a regular member of the cast.

Right now, I’m doing voiceovers for Nickelodeon. One project is called “Win Your Week” – the videos are 2- 10 minutes, and they show promos for Nick shows for the week, tell jokes, and talk about fun national holidays. Every week, I learn about new holidays—there are so many food holidays. My favorite is National Taco Day – I love tacos.

The other project is Nick Likes. They’re 20 second polls questions that give viewers two different options to vote on, and then there’s another episode that shows what they chose. Things like, “Who do you think will win the World Series?” It helps to get people involved, so you’re participating and not just watching.

I go into the city to record after school every Thursday. Each recording takes me about an hour.

I love acting and everything about it, especially being able to take on a role who is nothing like you. I try to make it really real by connecting the character to some part of myself. My favorite thing about acting is being able to meet people who are very different from me. When I’m acting, I get to live these moments that I’ve never had a chance to experience. Once, I went to California for an audition, and I wasn’t even myself—I was the character, stepping into the role. For part of the scene I had to cry, and I was doing it and didn’t even really know why. It helps that I’m empathetic.

You’re also an activist. What’s an issue that’s important to you?

After the school shooting in Parkland, I heard on the news on Snapchat that kids were doing a national walkout for 17 minutes in honor of each of the students who were killed. I led it at my school because I wanted to show solidarity with the families—I wanted them to know that we saw what happened, and it’s not okay. You should be safe when you’re learning. I also wanted to show our government officials that just because people are grieving, doesn’t mean it’s not the time to talk about laws and regulation.

My school also wrote letters to our state legislators.

What’s next for you? What do you want to be when you grow up?

I would like to go to Brooklyn College, Queens College, UCLA, or NC State A&T. I want to be a resident nurse. That’s what my grandma and my aunt do. One of my family members was in the hospital for a month, so I got to really see the nurses and all they do. They were the people supporting my family when we were going through a difficult time, and I want to do that for other families.

I’ll keep acting—I don’t want to give it up. I think I’ll be doing less acting in high school, because I’ll have extra work so that I can start college early. But my plan is to keep acting.