Standing Up For What They Believe In: Meet the 4 Girls Who Led a New Haven Walkout 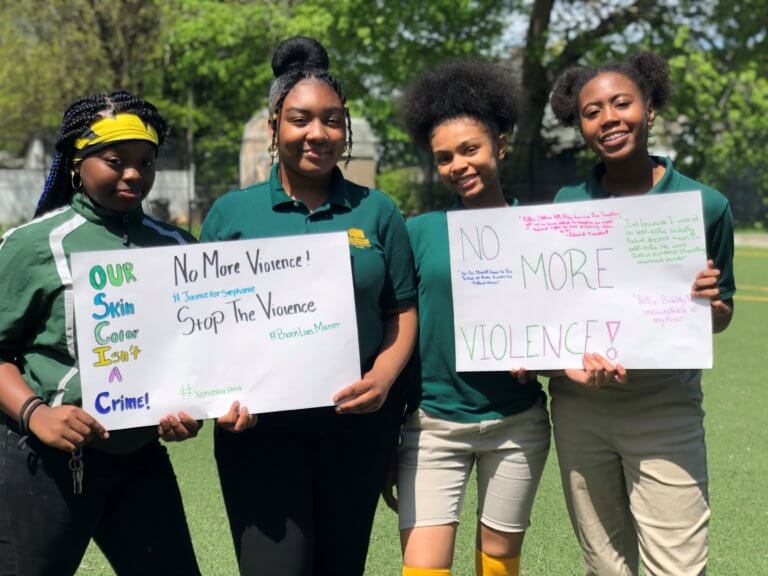 Nearly the entire student body at Elm City College Prep Middle engaged in a walkout to protest a recent police-involved shooting in the neighborhood and to speak out against violence in the community. It all started with four eighth-grade girls. Every school day, they spend their free period in a conference room to talk about ways to advocate for change. We sat down with them to hear their story.

How did the walkout get started?

Lamiyah: I got the idea from the shootings that were happening in New Haven around me, and I decided I wanted to put a stop to it. It’s too close to home. I knew I wanted to do something. In history, we’re learning about the Chicano movement and the civil rights movement, and we learned about how they walked out. I thought, “Why don’t we do a walkout?”

Karria: Hearing what happened to Stephanie and Paul, I didn’t have the same reaction as everyone else. Everyone else was surprised, but I wasn’t, and I realized that’s a problem. I just felt like this was a normal thing that happens, and that’s not something that a kid should have to feel—that a shooting is a normal every day thing.

Why is the issue of gun violence so important to you?

Harmony: I felt like we need a change. Every shooting is another life lost. Every life is important.

Tatianna: When I heard about Stephanie and Paul, I immediately thought about a couple of years ago when I lost my brother to gun violence. I used to live in this neighborhood. My friends are here. It’s heartbreaking. African-American men in our world and our society are targeted—by each other, and by police. I have younger brothers. They are too young to understand, but I fear for their lives if they make one wrong move. Trayvon Martin’s death really hit me, he was so young. It took me some time, but I thought, my brother did lose his life to this, why not just speak up for something that needs to stop?

Karria: A lot of people don’t understand, because we’re young. But they have to understand. The future they’re making for us is not safe, so we have to do something about it.

And you led the walkout, as students?

Lamiyah: Yes. We made announcements, we handed out posters. It was a lot of planning.

Karria: It was one walkout, but we can’t just stop there. There’s more we have to do to stop violence and other problems.

What’s next for you?

Tatianna: Racism still continues against people who look like us. Our voices need to be heard. When we learn about Stacey Abrams or Kamala Harris, and we see them making change, it just inspires us as teenagers to believe we can do it and be can be whatever we want. That’s important. Why just sit here like everyone else, and be a bystander?

Lamiyah: After I planned the walkout, something just happened. I thought, “Oh, I want to be president. I want to change the world now.”

You have our vote! Thank you all for your advocacy and standing up for what’s right!