"My Grandma is a Jamaican Immigrant with a 6th Grade Education. Now she has a granddaughter who got Yale, Brown, Princeton, Penn & Stanford." 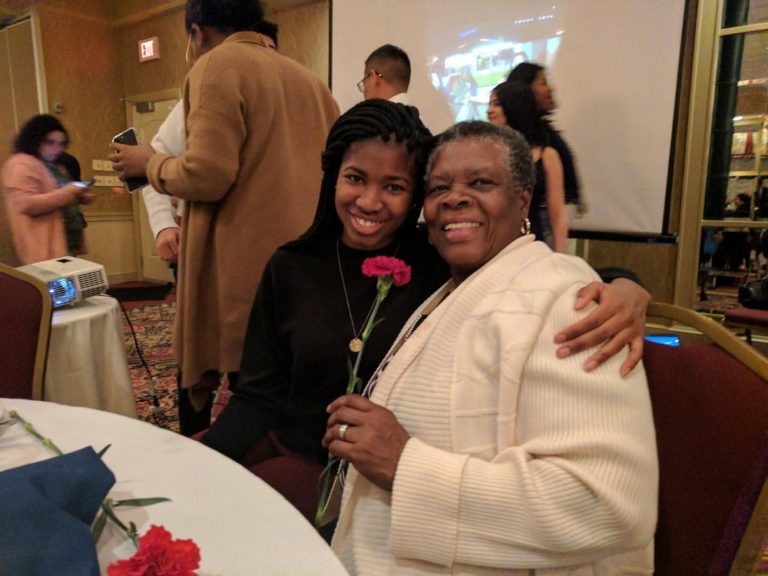 Isis, AF Amistad High ’17, was interviewed in Affinity Magazine after her inspiring tweet (which has earned 2100 likes and counting!) gained attention on Twitter. We thought our blog readers would enjoy reading her thoughts as well, so we’re re-posting here. Enjoy!

How has your grandmother and her struggles influenced your life?

My grandmother was never close with her mother, only her grandmother. So when she lost her grandma at a young age, she promised herself that she would place an emphasis on family values when she would have her own family, which is why we are so close today. Because she was very poor, lost her grandmother, who was her only support system, and had a family at a young age, she stopped going to school after 6th grade. However, her education level did not stop her from working hard to try to provide her family with the best opportunities that they can get. At the age of 31, she immigrated to New Haven, Connecticut, and worked every day and night except for Saturdays. After a year, she was able to afford to bring all 5 of her children to America and pay for their citizenship. Watching my grandmother raise her family as an independent, single mother—despite lacking a quality education—has convinced me that, with her work ethic and a better education, I can accomplish almost anything. I know that a college education will allow me to have the career I desire and will expose me to many more opportunities that my grandmother never had.

How has your Jamaican heritage influenced your life?

Jamaican women are very independent! Well, at least the Jamaican women that I have been raised around are. Growing up in a household with a single mother and with an independent grandmother to take care of me, I was taught from a young age that I did not need a man to accomplish what I wanted. My grandma always told me that if I want something done, I would have to get it done myself. Nevertheless, there are many traditional aspects of my Jamaican heritage that I tend to break apart from. Women are expected to remain in the cult of domesticity without many options to venture into areas outside of household duties. I may not know exactly what I want to do with my life, but I do not plan on being limited to the kitchen.

Did your family have high expectations of you while you were growing up?

I don’t think my family had high expectations of me academically; instead, they had high expectations of me athletically. When I was younger, I used to play tennis. I started when I was four, and by the time I was seven, eight, and nine, I was playing 35 to 40-year-old men. I was even selected to participate in the USTA’s 8/9 elite player development camp in 2008. At the time, my father refused to believe that I could go to college for free if I did not receive an athletic scholarship. He was a faithful believer of the stereotype that black people cannot be successful unless they are athletes. I quit when I was in 5th grade, though, because the sport was very lonely for me. Nevertheless, my grandma and mom thought differently from my father. They both had their opportunity to get an education taken away from them (my mom had a brain tumor that prevented her from continuing to learn), so they made sure that I could get a quality education. When I was just 3 years old, my grandma would have me in the backyard writing over and over and over during summer. In third grade, my mom had me transfer to a charter school dedicated to closing the achievement gap in low-income urban areas. From there on, it was the teachers who truly helped me get to the place that I am today. They pushed me and believed that I could do great things.

What were some of the challenges and doubts that you faced when applying for Ivy League universities?

I’ve definitely had impostor syndrome, which can be described as a feeling of inferiority and that I will be exposed as a “fraud” when surrounded by other incredibly smart people, in previous experiences (summer programs) on Ivy League campuses such as Yale and Princeton. I feel like I have been overcoming that with more confidence, but I have not overcome it completely. One of my biggest challenges next school year will be adjusting to the cultural shock that I know I will experience and having to deal with both macro and microaggressions when it comes to my race, gender, and low-income status.

What major/career do you hope to pursue?

I am drawn to history and sociology because it helps me understand how societies function based on influences from the past. In order to better my local, state or national community, I need to understand the factors that shaped my community to begin with. Then I can take that understanding, learn from past mistakes, and work toward a solution. While my high school history classes often left people of color and women underrepresented, learning about intersectional feminism through independent research projects helped me to see both aspects of my identity—black and a woman—represented in an academic context. Exploring African American studies as well as Women’s/Gender studies as a minor would allow me to develop a nuanced understanding of my identity and to learn more about my personal history.

What message do you want to send to young people who want to be in your position?

There is the standard advice like do your homework, get good grades, be active in your community. However, what is more important is using your influence and impact to help others. I started out by doing well for my grandma, but now I am continuing because it is evident that my success can help inspire others and drive them to success as well. Recently, I learned that pursuing academic excellence and social justice are not mutually exclusive. Ultimately, your voice is as powerful as any other, and, by using it, you can empower others to use theirs.