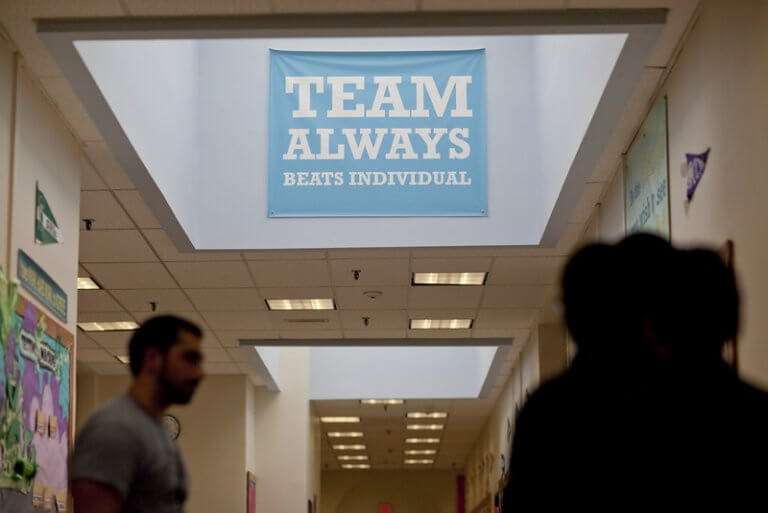 For as long as I can remember, people have told me I need to leave my community to succeed—but I’m choosing to stay, and raise my voice for the four out of five students in my city who do not go on to college. If we don’t speak out, no one else will.

Almost every day I hear someone say that I should “get out” of Bridgeport, and do something bigger and better. Many members of my own community view their own city as a place people should escape, as a desert that has nothing to offer. I even hear this from other students. When they talk about what they want to do with their lives, it seems like getting out of town is more important than graduating or having a career. But Bridgeport is not the problem—the system is. When our young people accept unfairness as normal, and something we cannot change, the real problem begins. Bridging the gaps in our imperfect education system helps bridge the gaps in our imperfect society—so it’s crucial students like me see ourselves as change-makers.

School funding is a striking example of this inequity, and one that I’m forced to confront every day. In Danbury, a nearby town, $12,724 is spent per student, whereas only an hour away in the whiter, more affluent town of Cornwall, $36,176 is spent per student. Last year, in my city, Bridgeport, our funding was reduced by $179 per student, while Cornwall’s funding grew by 19.8 percent. I could feel this inequity in the classroom when I watched my school increase class sizes from 20 to 30. I’ve experienced firsthand how larger classes, fewer teachers, and budget cuts can lead to more behavior management issues, which ultimately takes away from learning.

Going to a charter school, our funding must be regularly renewed, which is why I chose to speak at an Achievement First Charter Renewal, where hundreds of teachers, parents, and students came together to fight for our school. Amongst passionate, engaged, and motivated members of my community, we connected across our shared experiences as we had each endured our own form of racism and discrimination.

My school has its funding, but not enough to bridge the gap between my community and more affluent ones. We’re getting by, but we deserve more than that. In a 12-year-long state supreme court case brought by The Connecticut Coalition for Justice in Education Funding (CCJEF), the court ruled that “the function of the courts is to determine whether the narrow and specific criteria for a minimally adequate educational system under our state constitution have been satisfied.” But I refuse to settle for “minimally adequate.”

As is often the reality in this country, this isn’t just about socioeconomic inequality—it’s also about race. 97 percent of Cornwall’s residents are white, whereas Danbury’s demographics more closely represent those of the country at 54 percent white, 30 percent Latinx, 8 percent Black, and 6 percent Asian. In these two towns and across the country, there’s a tale of two students taking place. Both children have dreams of becoming doctors, lawyers, and teachers. But one child is standing in the background while their teacher is trying to regain control of the 30 other students in their crowded classroom, or acting out because their white principal doesn’t understand what it feels like to worry constantly about their brother getting killed by the hands of a police officer. A zip code has the power to determine the quality of an education, but it does not change its value.

When students are let down by the school system, we fall victim to the mindset that our voices aren’t influential, that too much damage has been done to make a change. But we have the power to change the status quo. The mindset that I need to leave the place I grew up to be successful changed when I realized I have the power to do something. Not only that I have the power, but the responsibility, because to do nothing would be to perpetuate structural racism and inequity, and I can’t accept that.

This funding difference makes it clear that I am not valued, so I understand why people think it would be better for me to escape to somewhere else, and make a difference there, in those communities. But then what happens to my community? Why can’t that same vision be achieved here, where I live?

There is nothing wrong with reaching beyond our borders to reclaim opportunities that were purposefully taken from us—whether that be attending college, gaining career experience, or traveling the world—but the important part is coming back to extend that opportunity to the place that raised us. Experiencing what it is like to be denied a chance from the moment I was born has inspired me to one day pursue a career as an educator, and use my voice to represent my community in a positive light. I hope to attend a Dual BA program between Columbia University and Sciences Po, studying for two years abroad in France. After that, I’d like to earn my master’s in education and psychology from Harvard University—and then I’ll return to my neighborhood to teach.

As I’ve started thinking more and more about my future, I’ve had to realize who I’m competing against: people who have more resources, more exposure, and more support. We are running the same race, but I started twenty steps back; I’m barefoot, but they’re wearing sneakers. Even if I take advantage of all the educational resources at my disposal, it is still not enough. It is not only in Connecticut where this glaring racial and socioeconomic divide intersects with education. This tale of two students remains the dynamic of America’s schools, with kids of color left to sink or swim in a system that was built to limit us.

This issue is bigger than a city problem, a state problem, or even a national problem; it’s an ideological problem. The notion that not all children deserve a quality education—that my pursuit of opportunity is less important than anyone else’s—allows the cycle of inequity to continue, and holds us all back.