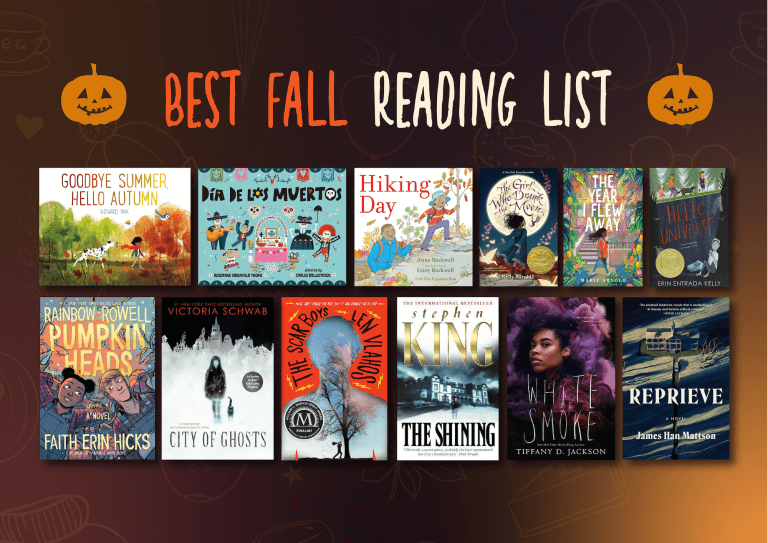 This October, we have put together a fall book list! curl up with a book that fits the season. We have your books set in autumn, your scary thrillers, and your cozy pageturners right here!

Do you have more fall book recommendations? Send them to moments@achievementfirst.org and we’ll add them to a future list!

From Goodreads: As trees sway in the cool breeze, blue jays head south, and leaves change their colors, everyone knows–autumn is on its way! Join a young girl as she takes a walk through forest and town, greeting all the signs of the coming season. In a series of conversations with every flower and creature and gust of wind, she says good-bye to summer and welcomes autumn.

From Barnes & Noble: El Día de Muertos, Day of the Dead, is here―a holiday for celebrating the lives of departed family and friends. Altars are decorated with sugar skulls and marigolds. Tamales and sweets are ready to eat. Soon it will be time for picnics, music, and a costume parade! Come join in these joyful and vibrant festivities that are a tradition in Mexico, the United States, and throughout Latin America.

Simon and Schuster: A young girl and her family go hiking up a nearby mountain for the very first time. As they climb up and up the path, they see everything from a friendly toad to a prickly porcupine, tall leafy trees to tiny red berries. Anne Rockwell and her daughter, artist Lizzy Rockwell, celebrate a day the little girl will never forget, especially when she reaches the mountain’s summit. With simple, lyrical text and bright illustrations that jump off the page, Hiking Day brings the joys of spending an afternoon outdoors to life.

The Girl Who Drank the Moon by Kelly Barnhill

Every year, the people of the Protectorate leave a baby as an offering to the witch who lives in the forest. They hope this sacrifice will keep her from terrorizing their town. But the witch in the forest, Xan, is kind and gentle. She shares her home with a wise Swamp Monster named Glerk and a Perfectly Tiny Dragon, Fyrian. Xan rescues the abandoned children and deliver them to welcoming families on the other side of the forest, nourishing the babies with starlight on the journey.

One year, Xan accidentally feeds a baby moonlight instead of starlight, filling the ordinary child with extraordinary magic. Xan decides she must raise this enmagicked girl, whom she calls Luna, as her own. To keep young Luna safe from her own unwieldy power, Xan locks her magic deep inside her. When Luna approaches her thirteenth birthday, her magic begins to emerge on schedule–but Xan is far away. Meanwhile, a young man from the Protectorate is determined to free his people by killing the witch. Soon, it is up to Luna to protect those who have protected her–even if it means the end of the loving, safe world she’s always known

From Barnes & Noble: Newbery Medalist Erin Entrada Kelly’s Hello, Universe is a funny and poignant neighborhood story about unexpected friendships. Told from four intertwining points of view—two boys and two girls—the novel celebrates bravery, being different, and finding your inner bayani (hero). “Readers will be instantly engrossed in this relatable neighborhood adventure and its eclectic cast of misfits.”—Booklist

The Year I Flew Away by Marie Arnold

From Goodreads: It’s 1985 and ten-year-old Gabrielle is excited to be moving from Haiti to America. Unfortunately, her parents won’t be able to join her yet and she’ll be living in a place called Brooklyn, New York, with relatives she has never met. She promises her parents that she will behave, but life proves to be difficult in the United States, from learning the language to always feeling like she doesn’t fit in to being bullied. So when a witch offers her a chance to speak English perfectly and be “American,” she makes the deal. But soon she realizes how much she has given up by trying to fit in and, along with her two new friends (one of them a talking rat), takes on the witch in an epic battle to try to reverse the spell. in the minor leagues. In their own ways, Maya and Rafael search for hope, face difficult choices, and learn a secret, the same secret that forever changes how they see the world.

But this Halloween is different—Josiah and Deja are finally seniors, and this is their last season at the pumpkin patch. Their last shift together. Their last good-bye.

Josiah’s ready to spend the whole night feeling melancholy about it. Deja isn’t ready to let him. She’s got a plan: What if—instead of moping and the usual slinging lima beans down at the Succotash Hut—they went out with a bang? They could see all the sights! Taste all the snacks! And Josiah could finally talk to that cute girl he’s been mooning over for three years . . .

What if their last shift was an adventure?

The Scar Boys by Len Vlahos

From A severely burned teenager. A guitar. Punk rock. The chords of a rock ‘n’ roll road trip in a coming-of-age novel that is a must-read story about finding your place in the world . . . even if you carry scars inside and out.

In attempting to describe himself in his college application essay—to “help us to become acquainted with you beyond your courses, grades, and test scores”—Harbinger (Harry) Jones goes way beyond the 250-word limit and gives a full account of his life … He had a steeper road to climb than the average kid, but he ends up learning something about personal power, friendship, first love, and how to fit in the world.

City of Ghosts by Victoria Schwab

From Goodreads: Cassidy Blake’s parents are The Inspecters, a (somewhat inept) ghost-hunting team. But Cass herself can REALLY see ghosts. In fact, her best friend, Jacob, just happens to be one.

When The Inspecters head to ultra-haunted Edinburgh, Scotland, for their new TV show, Cass—and Jacob—come along. In Scotland, Cass is surrounded by ghosts, not all of them friendly. Then she meets Lara, a girl who can also see the dead. But Lara tells Cassidy that as an In-betweener, their job is to send ghosts permanently beyond the Veil. Cass isn’t sure about her new mission, but she does know the sinister Red Raven haunting the city doesn’t belong in her world. Cassidy’s powers will draw her into an epic fight that stretches through the worlds of the living and the dead, in order to save herself.

The Shining by Stephen King

From Goodreads: Jack Torrance’s new job at the Overlook Hotel is the perfect chance for a fresh start. As the off-season caretaker at the atmospheric old hotel, he’ll have plenty of time to spend reconnecting with his family and working on his writing. But as the harsh winter weather sets in, the idyllic location feels ever more remote…and more sinister. And the only one to notice the strange and terrible forces gathering around the Overlook is Danny Torrance, a uniquely gifted five-year-old.

From  Kirkus Reviews:  Anxiety-ridden Mari, recovering from substance abuse, tries to start anew when her family leaves California and moves into a newly renovated home in the Midwestern town of Cedarville. She’s relocating with brother Sammy, stepsister Piper, stepfather Alec, and her mother, whose acceptance into a 3-year artist residency lets them stay rent-free in a new house that looks perfect on the outside. However, certain things ring alarm bells: a basement they’re instructed never to enter, construction workers who refuse to stay in the house past the afternoon, and the stories circulating around the neighborhood about what happened there. As Mari unravels the mysteries around her, she must try to avoid relapsing into bad habits; contain her dizzying, trauma-born phobia of bedbugs; and avoid the wrath of entities who wish her harm. Jackson conjures horrors both supernatural and otherwise in a masterful juxtaposition of searing social commentary and genuinely creepy haunts, as well as providing an authentic portrayal of tensions within a blended family. Mari, Sammy, and her mother are Black; Alec and Piper are White.

From Oprah Daily: Prepare for the goosebumps that await in this murder mystery set inside a full-contact escape room run by a one- percenter. Sharp as a razor’s edge, Mattson’s second novel follows a group of participants trying to survive the brutal game—among them a teenage film geek, a gay international student, and a disgruntled hotel manager. But Mattson’s devious trick is in revealing America itself as a topsy-turvy house of horrors.