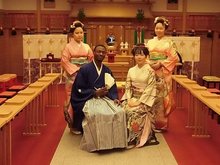 Julius’ academic journey has taken him to a highly selective college in Maine and across an ocean to Hokkaido–the northern island of Japan. During a three-month summer program, Julius studied culture, globalization and language at a Japanese university; he also donned a kimono as part of a special festival, visited architecturally significant buildings, and met students from across the country and the world.

He is blazing his own trail, and he wouldn’t have it any other way. Julius’ time at Achievement First schools taught him to pursue his individual goals and not just follow the crowd. It is a value system that has served him well at Bates College, where he majored in philosophy, minored in Japanese, and served as co-president of the martial arts club and president of the Discordians, Bates’ chemical-free organization. At Achievement First, Julius learned that he wanted “to be the change he wishes to see in the world,” and he gained the tools to help him forge his own path.

While he thrives on independence, making new friends and pursuing his own goals, Julius was also comforted to have a little piece of home with him on the Bates campus. Michelle, his classmate with whom he attended both Amistad Academy Middle and AF Amistad High, is always just a phone call away. Michelle and Julius always knew where to find each other when they needed support, and they included each other in their own on-campus social circles.

Julius’ trip to Japan was his first experience abroad, but it won’t be his last. Julius completed his 60-page thesis, graduated from Bates and returned to Japan to teach English for at least one year. He knows the tools he developed at Achievement First will help him continue his unique journey toward changing the world.

Favorite Aspect of being an Achievement First alumnus: “All of the teachers still say, ‘We’re here for you if you need it.’ I can talk to teachers about my time in school, about their recent students or about college. Even though my friends might not admit it, whenever we talk, our days at Amistad Academy still come up. It is great to have these memories and relationships and to continue to develop them.”

Proudest moment: “My proudest moment is achieving my dream of studying in Japan. I was supposed to go earlier, but it did not work out because of financial aid and I was very sad. Now, I finally have the chance I’ve been waiting for. It has always been my dream to go to Japan and to find and define my happiness.”