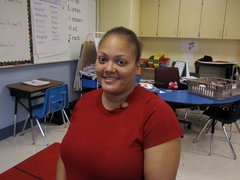 Alysia was drawn to Amistad Academy because her son, Christopher, needed structure and confidence. Christopher struggled with Attention Deficit Disorder and Alysia wanted him to go to a school that offered a special education program that could fit his needs. She found this approach deeply embedded in the school culture at Amistad Academy. Teachers included all types of learners in their classrooms, explained lessons in multiple ways and required students to keep journals. Alysia’s younger son, Matthew, a third grader, had difficulty with reading comprehension when he arrived at Amistad Academy. He has since shown great improvement, a result Alysia feels is based on the accountability and high expectations to which he is held.

At Achievement First, Alysia’s sons have found African-American male role models and strong advocates in their advisers. She has enjoyed the opportunity to partner with teachers and leaders to brainstorm and develop strategies that best help her sons learn. Alysia feels Achievement First schools have taught Christopher and Matthew that they can perform better than what they had assumed was their best.

Proudest Moment at Achievement First: “My son Christopher, who graduated from AF Amistad High and enrolled in Southern Connecticut State University, had struggled with reading. Last semester, he earned a high ‘B’ in his reading class. In writing, he earned an ‘A’ and his professor singled out his paper as an example of how others should write. I know he is using the things he learned at Achievement First to be independent, confident and successful in college.”