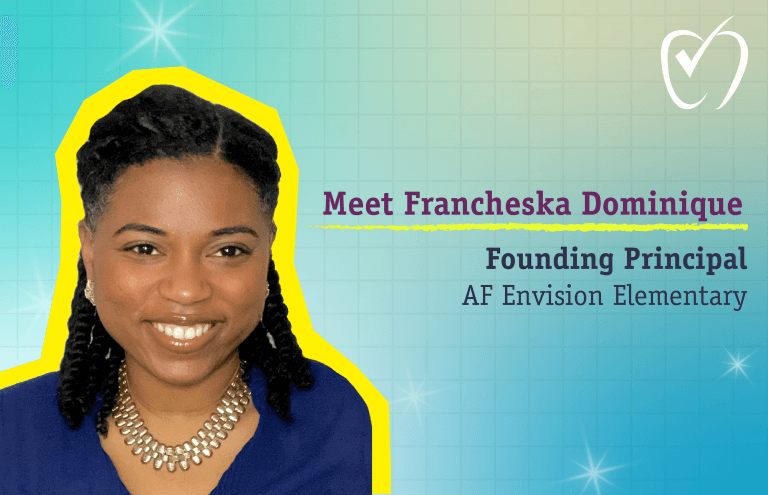 Francheska Dominique is the founding principal of AF Envision Elementary in Providence, which opened its doors this school year.

Tell us about yourself, where are you from? What are some of your favorite hobbies?

I was born and raised in Boston, Massachusetts, and moved to New York City when I started teaching. I now live in Rhode Island with my two little dachshunds, Prince and Duke. Since we moved here, I’ve nicknamed them the Royals of Rhode Island. I love taking them on walks, and I recently took them to the beach for the first time this summer. I love to go on adventures with them. I also love going to museums — that’s one of my favorite things to do. I like playing games and hosting game nights with my family. I love karaoke — I always have a mini karaoke microphone in my bag and am ready to sing with anyone who wants to join me.

What inspired you to get into education?

When I was at Harvard, I studied economics and African American studies. I thought I was going to be a lawyer, and then a researcher. One summer, I worked for Phipps Neighborhoods, a social services nonprofit organization, in the South Bronx. I did research on literacy programs that motivated kids to read. I gathered a lot of research and came to the conclusion that these programs are only as good as its teachers. I wanted to do more than write a research paper about how to help students. I hated the idea that I could write this whole paper, but no one had to do anything about it. That’s when I decided I didn’t want to go law school and that research wasn’t for me. I applied to Teach For America and was placed in Achievement First right after I graduated from college.

You’ve been with Achievement First for many years! What has kept you in our schools?

The reason why I stayed is because I was placed in a great community –  I was placed at AF Apollo. I really loved the community we served in East New York. I love that AF cares about people. AF cares a lot about their staff. I’ve also seen AF, year after year, confront the things we’re not doing well and try to get better at it. I saw it everywhere, from my school to Network Support. And, because of that, I felt like I got better as a person and professional. That’s what’s kept me here all these years.

When did you know you wanted to be a principal?

I originally did not know if I wanted to become a principal. I was part of AF’s Principal Fellows program. Part of the first year of the program involved visiting a lot of great schools in Boston, New York, and Atlanta. One thing that was awesome about the visits was the opportunity to speak to school leaders and learn about their vision and how they ran their schools. It opened my eyes to what it means to be a principal. I had a false sense of what a principal did.I thought they were the know-it-alls who ran the school and did everything. The leaders I met talked about how principals set the visions and conditions, and they support everyone to be their best. You’re not the one who runs the school, your staff runs the school. Once I thought about it that way, I was ready to become a principal and help others grow. I was excited to come to Rhode Island and serve a community that is clamoring for strong school options, and I’m really excited to be one of the options for them.

As a founding principal, what are you most looking forward to?

I am looking forward to creating a school community where kids feel safe, known and loved. We’re implementing strong and interesting programs in ELA and Math. We serve a large Latinx community and we have a lot of Multilingual Learners at our schools, so I’m really excited about these programs because I think it will support those learners in a meaningful way.

What do you want scholars and families to know about your school?

I want our families to know we support their kids in achieving great things, and that starts in elementary school. I want our students to have fun while they learn, and build strong relationships with their teachers and peers. That’s my vision and that’s my goal for this school. I want our community to know my door is always open to them.