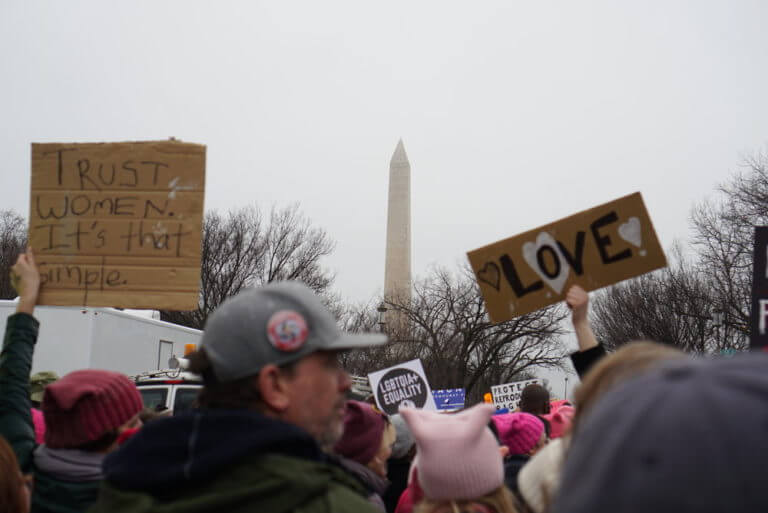 Members of our AF family share their experiences standing up for equality for all at the Women’s March on Washington.

After climbing through what seemed to be a never-ending number of women in one place, I finally made it to a high point—a place where even I, a five foot tall woman, could see the history in front of me. As I looked out at the pink hats, inspirational posters and abundance of women, men, and children, I began to feel. I began to feel for my friends who are women not getting paid equally compared to men. I began to feel for the families fearing for their lives as immigrants. I began to feel for my own family, friends, and coworkers who share the same skin tone as me and find it hard to be not only a black American but a black woman in America.

While I basked in my feelings, I was disrupted by a small group of children. The small girl was nervous to start her chant but found the courage to do so anyway. As she began, to my surprise, I realized her chant was “When they go low, we go high.” This march was not only a movement, but it was also reassurance for me. Reassurance that as America we still feel, as America we still fight, and as America we can heal together.

In D.C., I was awed not only by the sheer number of human beings around me (literally every block was packed, to the point that the event became more of a passionate standstill than a march), but also by the creativity, empathy and sharp intelligence of the participants and their protest accoutrements. If you’ve been on the internet in the past week, you’ve seen what I’m talking about – that mix of humor and desperation, of artistic prowess and feats of wordplay. What made this even more incredible was that some of my favorite, most thoughtful signs and conversations were generated by my very own AF colleagues, people who already contribute so much of their time and energy to fighting for educational justice, and who also see the clear link between educational equity and the larger fight for equality in our country.

But it doesn’t stop here – I look forward to continuing these conversations and taking action in the fight for justice.