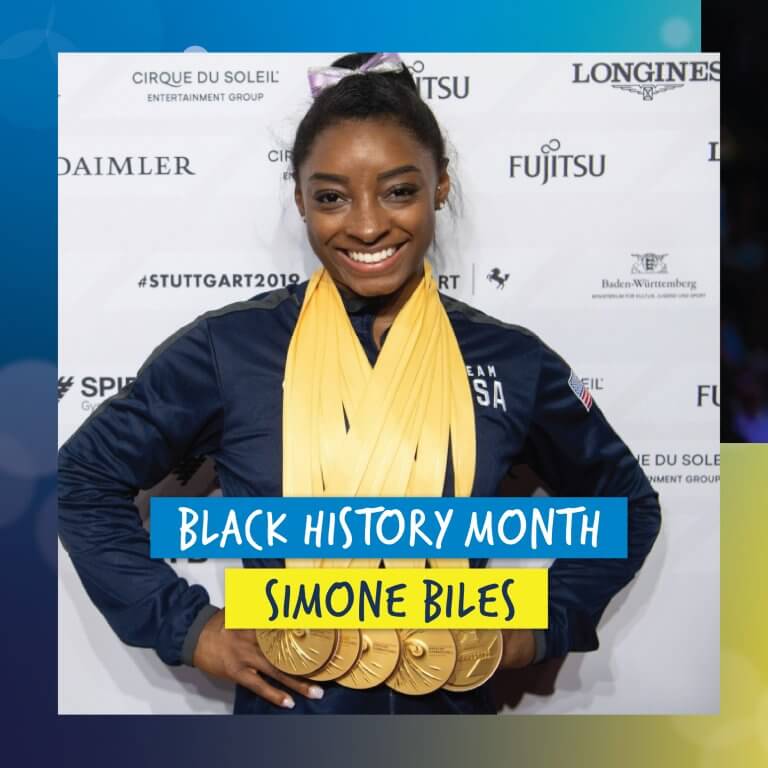 Throughout Black History Month, we are celebrating important figures in Black History and the scholars whose dreams they help make possible. Simone Biles is a Gold Medalist Olympian gymnast and mental health advocate. She is Black Girl Magic.

The World’s Most Decorated Gymnast

Once you’re done marveling at Simone Biles’ acrobatic flips and game-changing moves, take a closer look at what’s sewed into her leotard. Sometimes it’s the acronym, sometimes it’s the actual animal, but upon further inspection, you will see a goat. The goat stands for greatest of all time.

Her achievements on the mat back the claim: 32 Olympic and world medals, the most decorated American gymnast, signature moves named after her, New York Times best-selling author, the list goes on. She is an all-around leader – in sports and in mental health– who embodies what greatness looks like.

Simone Biles demonstrated her abilities as a gymnastics prodigy from an early age. As she grew older and made her way through juniors and onto senior elite-level gymnastics, her natural gifts developed. Concurrently, she racked up award after award. She won her first U.S. and world all-around titles in 2013, becoming the first Black athlete to do so. Two years and a successful title defense later, she claimed a record third straight world all-around title.

Biles used the Olympic stages in 2016 and 2020 to further add to her resume. And while she sits atop Mt. Olympus as one of the greatest Olympians ever, her admission of vulnerability and strength of conviction made her even more of a champion.

Simone Biles’ decision to step back from competing in the 2020 Tokyo Olympics and willingness to talk about her mental health may help other, less famous people with struggles of their own. Admitting vulnerability has long been anathema to Black Americans striving to win in all kinds of hostile environments, including athletics. Thanks to Biles, that’s changing.

She’s a Black woman, and the top athlete in a sport with a deeply coded racial history– that alone says so much. Witnessing how she uses her platform shows more. Watching her in action is seeing the living embodiment of Black girl magic. 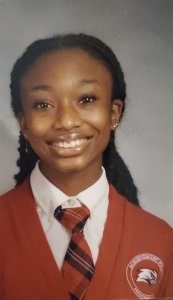 If you can’t find Zarianne cheering, “Providence High School, let’s go Falcons,” you’ll probably find her doing community service and trying to help others. The way she leads behind the pyramid and pom poms is through action: doing her part and encouraging her teammates.

Cheerleading is her escape from the normal stressors every freshman goes through. Learning cheers, ‘dancing it out,’  and experimenting with new tricks are her necessary ingredients to feel better.

But throughout cheerleading and earlier on in life as a gymnast, this was not always the case. Like Biles, Zarianne struggled with confidence issues and failed at learning new tricks. But this Biles’ quote resonated with her, “Practice creates confidence. Confidence empowers you.” With encouragement from her mom and lots of practice, she was able to nail her routines.

When pressure mounts and obstacles arise, Zarianne knows what is most important: self-care and her mental health. Although cheer season is almost over, Zarianne has sights on a new sport to add to her ‘floor routine’ – track. As she hurdles to her freshman year finish at AF Providence High School, Zarianne looks toward a future where she feels empowered and able to conquer anything in front of her.

For inspiring moments in Black History and American History, follow our social media this month!