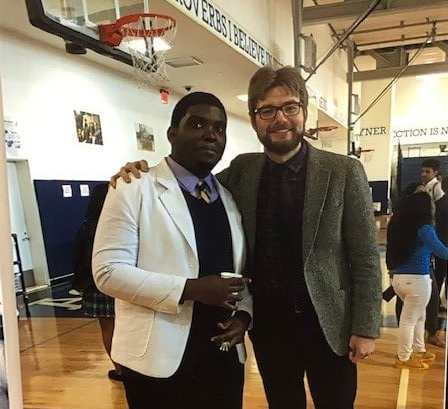 Michael Melvin is a teacher at Achievement First Brooklyn High School. We sat down with him to learn more about his journey over the last 10 years at AF.

Tell us about yourself. How did you get into teaching?

In college, I majored in English and minored in journalism. I thought at one point that I was going to become an English professor. Then, I heard about Teach For America and thought that might be a good way to see if I truly wanted to teach–I figured I would do two years, and then go on to grad school and become an English professor. I found out that I really enjoyed teaching high schoolers. First, I taught middle school, and I was terrible. I was doing my version of what I thought a teacher was supposed to be—the archetypical “no nonsense” teacher—and it didn’t work. Then in high school, for some reason, I was more naturally myself and I became much more comfortable. I could naturally combine my organic voice with my presentation style as a teacher. I was placed in New Haven initially, but spent most of my three years teaching high school in Bridgeport. I never ended up applying to grad school, as I found my calling.

How did your journey lead you to AF?

Achievement First leaders did several trainings for my TFA cohort, and I had friends who worked at the elementary schools in New Haven, so I was aware of AF. Then my girlfriend at the time–now my wife—moved to New York, and so I applied to AF here. I applied blind to AF Brooklyn High, not knowing it was going into its second year as a high school–and a brand-new building. Now, it’s my 10th year here. For nine of those years, I taught 10th grade ELA. This year, I moved up to 12th grade, where I’m teaching AP Literature and American Literature.

You started at AF when you were dating your girlfriend, and now you’re a husband and a father of two! What has it been like to “grow up” at Achievement First?

I know that AF emphasizes the “Team & Family” element of our work and I feel extremely lucky in that I’ve seen that play out in my experience at AF Brooklyn High. I have some incredibly strong foundational relationships I’ve built with many of my colleagues who I’ve grown up with basically, be it as a husband or as a father. I’ve had so much growth professionally as well, in that I cringe at the teacher I once was when I thought I had it “all figured out.” I’ve been growing concurrently with the school, which is fascinating. Also, as a father, I now feel more clearly the awesome responsibility of supporting someone else’s child each day and I would be disingenuous if I didn’t mention some of the “best practices” that I’ve learned at AF filter into how I parent.

What do you love about teaching?

Teaching literature, you’re always learning something new. My favorite thing about teaching in general is that you’ve never actually figured it out—no one has. There are things that are best practices, and things that could go better, but it’s a constant evolution. You feel like you’re constantly growing, there’s always something better you can do. I really love that aspect of teaching, that ultimately everyone can always improve. I’m a Stage 4 teacher on the Teacher Career Pathway. As a teacher at AF, all of us are learning things we didn’t think about before, whether it’s how to implement something technically, or broadly, or whether you’re looking at a literature text in a completely new way. Kids will have ideas you’ve never thought of before. I love watching kids have their “a-ha” moments about literature.

And what do you love to do when you’re not in school?

I’m someone who really likes movies, that’s something I liked to do on my own when I had more time and a more disposable income. But now that my son is getting a little more cognizant—he’s four—I can see how he’s developing through the things he watches. He’s very into Pixar and stuff like that. In fact, I may have seen/heard Toy Story 2 more times than I’d like to admit. Something that sticks out is there’s this moment in the film Cars where they’re playing this sad song about how the town is changing and as we were watching he just turned to me and said out of nowhere, “that is so sad.” Chinua Achebe said something along the lines that the power of literature is it allows us to identify with others who are different from us. To empathize with someone else. Granted, I’m referring to my son’s reaction to an anthropomorphic car, but I just love seeing him develop as an individual.

Thanks for sharing, Michael!