Some of the Greatest Teachers of All Time Taught Virtually 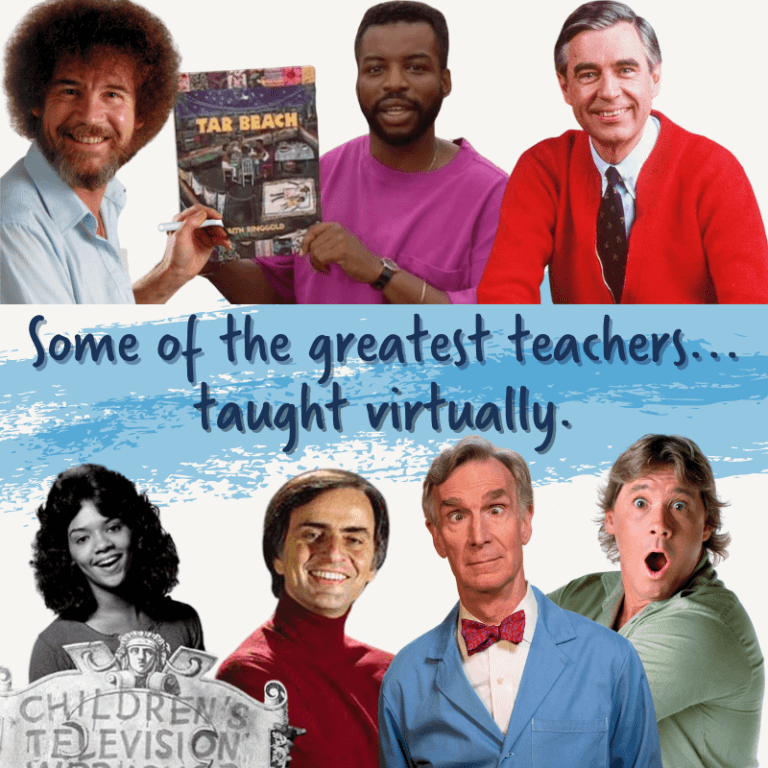 As schools across the country shuttered to slow the spread of the coronavirus, the educational community knew it had to act fast. Almost overnight, students became remote learners and teachers were suddenly virtual instructors in what has been dubbed the biggest distance learning experiment in history. As educators rise to an unprecedented occasion, they’re in good virtual teaching company. After all, some of the world’s best teachers taught virtually. These educators prove that learning is learning, whether it’s happening on screens or in classrooms.

Take a Look, It’s in a Book with LeVar Burton
Tuning into a television broadcast to promote reading may seem counterintuitive, but it worked for Reading Rainbow. The show, which first aired in 1983, would eventually earn 26 Emmys for excellence in children’s programming during its 26-year run, and was the third longest-running children’s show in PBS history—surpassed only by Mister Rogers and Sesame Street (also on the list!). Reading Rainbow was hosted by actor LeVar Burton and heavily relied on traditional storytelling methods. Each show had the same, three core elements: There was the reading of a featured book, an adventure relating to the content, and a concluding segment that featured children giving book reviews.

While other educational programming focused on reading fundamentals—like phonics and spelling—Reading Rainbow helped teach the love of reading. “Reading Rainbow,” Burton told The New York Times in a 1983 interview, “picks up where programs such as ‘Sesame Street’ leave off. Rather than approach the subject of reading from the fundamentals, we take it one step further. We address the kids who are beginning to read and say: ‘Look what happens when you put it all together.'”

LeVar Burton is a national storytelling treasure who inspired a generation of young readers. But you don’t have to take our word for it.

Behind the Canvas with Bob Ross
If you wanted to experience the spellbinding magic of a blank canvas transforming into a beautiful work of art in a mere 30 minutes, Bob Ross was your guy. He made artwork accessible to the masses through the Joy of Painting, a PBS program he hosted for 11 years. Whether a professional painter or simply an art aficionado, the program appealed to an incredibly wide audience. Ross was also known for his undeniably calming presence, soothing voice, and sprinkles of encouragement and wisdom, which have been immortalized by everything from coffee mugs to memes. He would also teach us one of life’s most important lessons of all: There are no mistakes. Only happy accidents.

The Crocodile Hunter from Down Under, Steve Irwin
Steve Irwin, affectionately known as “The Crocodile Hunter”, was an Australian zookeeper, wildlife expert, environmentalist, and conservationist. Irwin once said, “my job, my mission, the reason I’ve been put onto this planet, is to save wildlife”. And save wildlife he did. Week after week, Irwin brought the natural world into our homes by way of his wildly successful television show The Crocodile Hunter, which aired on Animal Planet from 1996 until Irwin’s untimely passing in 2004. The Aussie outdoorsman captivated audiences around the world with his daring adventures in the wild and an incredible sense of humor to boot. He was truly a force of nature.

Bill! Bill! Bill! Bill Nye the Science Guy!
William Sanford Nye, best known as Bill Nye, was responsible for helping inspire a young generation of scientists through his hit show Bill Nye the Science Guy. Zany scientist Bill Nye made the world of science inviting and fun. In Bill Nye’s lab—or your at-home kitchen laboratory—everyone is a scientist. Nye’s show would earn an impressive 19 Emmys, proving there was certainly an appetite for science edutainment.

Out of this World with Carl Sagan
Carl Sagan was a world-famous astronomer, planetary scientist, and Pulitzer Prize-winning author. He is perhaps best known for hosting a 13-part PBS miniseries called Cosmos, which became one of the most widely watched series in public television history.

From South Bronx to Sesame Street with Sonia Manzano
Sonia Manzano was television’s first leading Latina actress for her role as Maria on Sesame Street, helping to break racial and gender barriers in the early 1970s. Audiences got to watch Manzano grow up on the screen during her 44 years with the popular television program. Manzano was also at work behind the scenes, serving as a key member of the Sesame Street writing staff and earning 15 Emmys for television writing. She’s taught children everything from the alphabet to women’s rights as her character evolved over the years.

“As a kid, there was always a lot of chaos going on around me and I found a certain comfort in television sometimes,” she told the Archive of American Television. “I hope that I can be remembered as the person who created a moment of safety for a child watching.”

A Beautiful Day in the Neighborhood with Mister Rogers
Fred Rogers was one of the earliest pioneers of educational public television. In many ways, he paved the way for the others featured on this list. When it came to child social-emotional development, no one was quite as masterful at this work than Rogers. The man behind the famous Mister Rogers’ Neighborhood broadcast had an uncanny ability to captivate and connect with children. Accompanied by his puppet pals from the Neighborhood of Make Believe, Mister Rogers taught his child viewers how to work through the tough feelings and find appropriate outlets through play. He didn’t shy away from challenging conversations, especially when it came to exploring difficult emotions.

“This is what I give. I give an expression of care every day to each child, to help him realize that he is unique,” said Rogers. “I feel that if we in public television can only make it clear that feelings are mentionable and manageable, we will have done a great service for mental health.”

Regulating emotions is incredibly important, particularly during unprecedented, unconventional, and uncertain times. Rogers gave parents a blueprint of sorts, teaching them the importance of play and how best to facilitate their children’s social-emotional development. It’s no wonder why he was, well, everyone’s favorite neighbor.