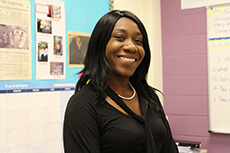 When Laneka was in middle school, she dreamed of becoming a defense attorney. She never imagined that she would one day find her passion teaching physics in the same building where she attended eighth-grade classes. Born and raised in Hartford, Laneka graduated from Hartford Public Schools and became the first person in her family to graduate from a four-year college. As a high school student who was enrolled in the district’s gifted and talented program, she was troubled that many of her peers didn’t have the same choices or opportunities that she did. As an AF Hartford High teacher, she is excited to provide excellent educational opportunities to students in her community.

Even as she pursued her dream as a law student, Laneka always felt a pull toward improving education in her community and helping young people make better decisions. She served as a substitute teacher during law school and, after graduation, worked in juvenile court while also coaching a high school trial team. Laneka returned to her Hartford community, where she still lives with her husband and children. After working at a private law firm, she was introduced to education reform through her role in policy and research at the Connecticut Senate Democrats. While she enjoyed her work, she was frustrated with the way legal policies were applied to struggling students—children from her neighborhood—and knew she wanted to find a more direct way to help. Laneka, who has a strong background in math, science and law, was drawn to Achievement First not only by its strong academic program, but also by its investment in character development. She is thrilled to teach students in her community about what it means to be a great citizen and a great student.

Favorite aspect of role: “I love interacting with our students. We come from the same community, and I hope that I can leave a lasting impression of what is possible.”

Proudest moment at Achievement First: “During one of the first weeks of my first year at AF Hartford High, a student in my advisory sought me out during study hall. She was having some problems, and she wanted to talk through them with me. The next week, she asked if I would write her a recommendation. I was proud that I had already established a level of comfort with my students—even just a few weeks into the school year—and it was great to know that I was able to put her at ease.”