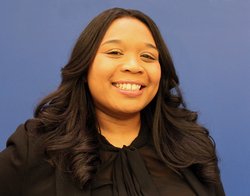 When Crystal Ward taught sixth-grade science and social studies at a turnaround school in Washington, D.C., she noticed the students who thrived in her classroom were asked to leave almost all of their other classes because of misbehavior. To Crystal, that seemed unproductive and unfair. As Achievement First’s director of school culture, Crystal coaches deans across the network in maintaining high expectations while creating environments where children love school because they feel affirmed, safe in taking academic and character risks, and secure in the knowledge that their “Team & Family” cares about them and their success in life and school.

In her role, Crystal works closely with regional superintendents to ensure each school has the foundational structure it needs to foster uninterrupted learning and deep intellectual engagement with academic content.

Crystal initially joined the Achievement First “Team & Family” as the founding dean of school culture at AF Endeavor Elementary. She accepted the role after a long career in working with children as a mentor, an Algebra readiness tutor and as a Teach For America corps member. Crystal, who feels strongly about the need to connect students with role models who share their experiences, also recruited teachers from historically black colleges and universities for Teach For America.

Crystal’s childhood experiences drew her to a career in education. Growing up in a military family, Crystal attended public schools in England, Alabama and New Mexico. She was accepted to a Connecticut prep school in 10th grade and—despite the fact that she had always been at the top of her class in public schools—found that she was initially underprepared for the rigorous reading and literacy curriculum. At Achievement First, she works on a “Team & Family” committed to making sure students are prepared for future success.

Favorite Aspect of Working at AF: “My favorite part of doing this work is that I get to see our most struggling students succeed. We know other schools might give up on kids, but here we invest even more in the children who need the most help.”

Proudest Moment at AF: “One of our AF Endeavor Elementary students, a young man who had been in my office quite a bit as we worked on various issues, had watched a video about REACH values during an assembly. When I was featured in the video, he started blowing kisses at the screen. It made me proud to know that even though this is a child with whom I had challenging conversations on a daily basis, at the heart of it he knows I love him.”