Doug's Thoughts: The Realities We Must Acknowledge 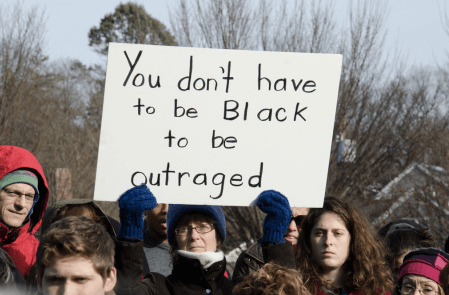 I am a middle-aged white man helping to lead an organization that serves mostly black and brown children, so I feel a special responsibility to learn, listen, and act in response to the recent tragedies in Baton Rouge, Falcon Heights, and Dallas – and so many before them.

I’ve been doing a lot of reading, reflecting, and listening, especially to the voices of people of color, and I’ll continue to do so. I don’t have all the answers – in fact I have more questions than answers, more to learn than teach, more to explore than proclaim.

But I do know that in order to move forward as a country, I and other white Americans must directly acknowledge and address racism, listen to the voices and pain of people of color and work as allies with them.

Here are a few of the things I have been thinking about:

Racism is still very real. For many white Americans, this obvious fact seems to be controversial. I grew up in North Carolina. I had cousins who used the n-word casually at Thanksgiving dinners. When I was in elementary school, there were two black kids in my second grade class; one of them had a nickname of “watermelon.”  In college at arguably the most liberal college in the state, the University of North Carolina at Chapel Hill, I heard the n-word used on occasion, and I see on Facebook that some of those folks who used it are doctors, finance professionals and other “respectable” positions. When on vacation at the Outer Banks last week, we passed countless Confederate flags, including one large flag hanging on a house beside a public pier on the intra-coastal waterway. I cringed when I saw it, and I cringed again when I saw an elderly African-American man fishing under its shadow.

Many white Americans will then agree that a limited number of folks do exhibit these overt forms of racism, but they say that’s just a fringe. We took the Confederate flag down from the state capital building, we elected a black president … racism is dead. Many northern whites will comfort themselves with the idea that racism is a southern problem. False. My experience is that school districts and neighborhoods are far more intentionally segregated in the north, and I’ve seen white store owners in both New York and New Haven make “eyes” with me when black teenagers come in and then later hear them comment about not wanting “thugs” in their store.

White privilege is real.  I don’t ever think about holding onto receipts when I go shopping (as black friends have told me they do) because I’ll worry about being accused of shoplifting. I don’t have to worry that if my teenage nephew goes into a store, store owners will follow him. I can talk with my mouth full or make a grammatical mistake in my speech without worrying that people will think this is a reflection of my race. I can have the comfort in most settings of not being the “only” one. Unless we are conscious of this privilege, it’s impossible to work to create diverse and inclusive environments where everyone gets to be their true selves.

Black fear of the police is real and reasonable. White people can have a collective amnesia, seeming to forget that we have a centuries-long history of law enforcement – like the rest of society – being tilted against black Americans. The whippings and killings in slavery moved to lynchings and all-white juries convicting “rapist” black men. For many, many years, the police and courts were part of a system of deep oppression.

The black community is clearly stating what should be obvious to all: this is not new. Their grandparents, parents, aunts and uncles experienced discrimination and sometimes brutality at the hands of the police. And this is still happening. When a black Republican U.S. Senator says he’s been stopped seven times in the last year while driving and profiled by U.S. Capitol police … when countless others are saying that they are being treated with disrespect … we all have to listen.

It is a reasonable response of the black community to fear what could happen in a bad encounter with law enforcement, to have “the talk” with their sons and daughters. This, of course, carries a tremendous emotional weight that I as a father of two white sons do not have to bear.

Dr. Brian H. Williams, the African-American surgeon who treated police gunshot victims in Dallas, summarized the feeling well: “I want the Dallas Police Department to see I support you. I defend you. I will care for you. That doesn’t mean I will not fear you. That doesn’t mean that when you approach me, I will not have a visceral reaction and start worrying about my personal safety.”

This also does not mean that violence against police is okay. It’s not – it’s reprehensible.

It just means that the experience of much of black America is that while there are many Andy Griffiths out there, there are still enough Bull Connors to create fear and distrust. Moreover, we must also acknowledge that when the “warrior” mentality replaces a “servant” one – most visibly by the militarization of police departments – the black community bears a disproportionate brunt. Just like I am arguing that white Americans need to call out racism and challenges of other white Americans, good police officers need to take the lead to call out discriminatory, hyper-masculine and abusive police tactics.

I know there is much more to do for white Americans to be effective allies. I am reflecting on what I can do in my leadership of Achievement First and what I believe I and other white Americans must do more broadly.

I do know, though, that it starts with acknowledging the truth: Racism is real. White privilege is real. Black fear of the police is real and reasonable.  Most police officers are strong public servants, but bad apple cops are real. Black Lives Matter.

Doug McCurry is the co-CEO and Superintendent of Achievement First.