Checkmate: How a Game of Chess Led to an Unexpected Friendship 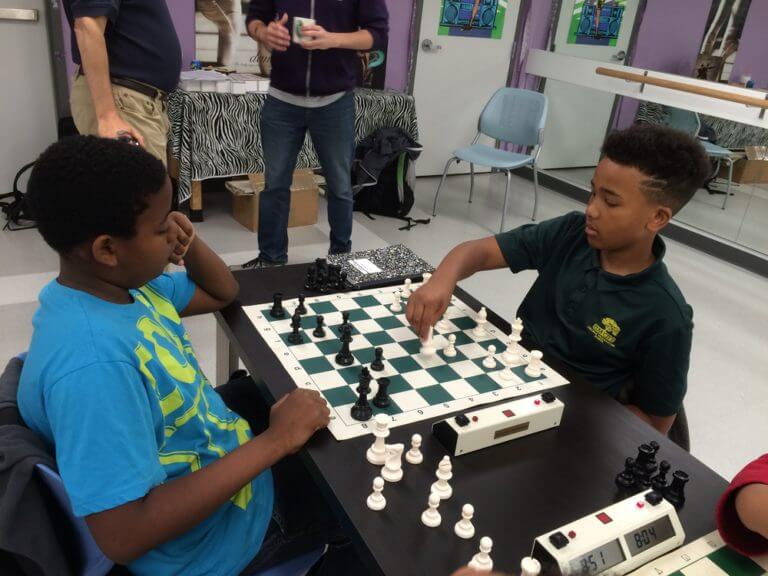 Last week was the final round of Expeditions for the fifth and sixth graders at the Greenfield campus of Elm City College Prep Middle School. Students participated in week-long programs in subjects as wide-ranging as Dramatic Writing, Robotics, Watershed Ecology and Shakespeare, all taught by external partners and supported by our teachers. Kevin Langstaff is the school’s sixth grade math teacher, and he wrote this reflection after observing two of his students on the last day of the Chess Expedition.

It was noon in the mirrored dance studio, chess boards laid out on the long tables set up in the room. At the table nearest to me, two young men stood out, Jelani and Tey’rik. They were silent– their brains on and their wits being tested. Only one would leave the match victorious.

The story of Jelani and Tey’rik doesn’t start with this game, though. Just a year before the chess game, you could frequently find them verbally sparring. They would reconcile and then begin arguing again. No one who worked with them back then would have believed that these two would be sitting across from each other with eyes fixed on the other’s king.

In the dance room, this new battle waged. Jelani executed a move and hit the timer, leading Tey’rik to respond in kind, bringing a smirk to his face. Other teachers crept into the silent room and watched in admiration as these two students played as respectful equals. As the game came to a close, Tey’rik moved his queen into position. Before Tey’rik could utter the word, Jelani realized it was “checkmate.” The match was over. Jelani raised his head, as did Tey’rik, and their eyes that had for so long been transfixed on the black and white board now met the other’s. Then, finally, the greatest move of all: each boy reached out his right hand and shook in a sign of total respect.

I looked on elated. I, of course, had thought that only one could leave victorious. But Jelani and Tey’rik both walked away from the table having won something more than the game. Rather than vanquishing a past enemy, both young men did what only the best can do: turn past enemies into friends.