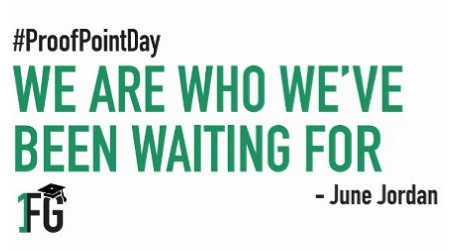 Chastity Lord is the Chief External Officer of Achievement First and creator of National Proof Point Day (#ProofPointDay), an annual movement that celebrates and recognizes first-generation college students and graduates and their allies.

Rumor has it that someone wants to make America great again. Unfortunately, our country wasn’t always great—many citizens were not seen, heard or valued.

My mother, born in 1950, courageously integrated her high school in search of educational equity. Her mother and (my grandmother) spent over 25 years working as a maid, nanny and cook for a family from sun up to sundown, referring to them as Mr. and Mrs.—while she was called by her first name—by adults and kids alike.

Bear with me if “making America great again” sounds like a clarion call to revisit a time where my energetic 19-month old son would not be seen, heard or valued.

Over the next couple of months, thousands of poor, working-class, Black and brown young people will be graduating from high school and college in search of their American dream. Many of these individuals will be the first in their families to attend, and in most cases, graduate from college.

In fact, nearly a quarter of college undergraduates are from low-income families and are the first generation in their family to attend college (FGs).

As a first-generation college graduate, I do want to return to a time when our country “behaved magnificently” and thought of education as an investment and not just an expense—the GI Bill, Stafford Loans and Pell Grants. This commitment put hundreds of thousands of people with non-traditional narratives through college.

This investment impacted rural, urban, Republican, Democrat, gay, straight and all shades of the ethnic diaspora—these investments were the proverbial bootstrap for many first-generation college graduates. Bridging the opportunity gap cannot become synonymous with entitlement.

Despite the high number of low-income FGs, Pell Grants now only cover 30 percent of college tuition at a public college, the lowest percentage in 40 years. Meanwhile, college tuition has been rising almost 6 percent over the rate of inflation for decades.

As first-generation college graduates ourselves, we know how hard it can be. Education was not the panacea for inequity in our lives but it has played a transformative impact in defining our dreams, narratives and revolutions.

Many of us live lives that our families did not know existed. We did it because we had support: FGs and FG allies who served as role models and evidence that our dreams were possible. Without them, we would never have made it this far.

I have an idea: Let’s make higher education great again.

Because in the words of June Jordan, “We are who we’ve been waiting for.” We owe it to ourselves and the next generation to be vocal and visible. Together, we can make America great again—for everyone.