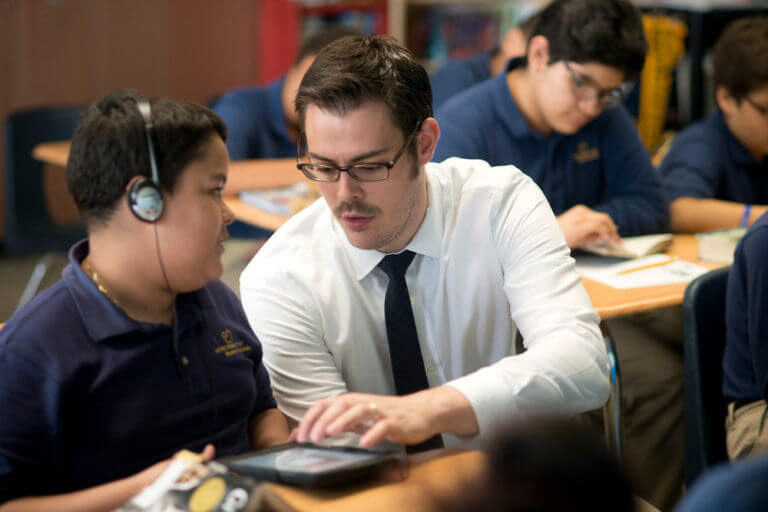 Our “Meet the Teacher” series continues with Eric Snider—Master literature teacher and basketball coach at AF Bushwick Middle in Brooklyn, New York. In our conversation, Eric talks about his path to teaching as a career, what hard work looks like in the classroom and on the court and shares advice for new teachers.

Let’s start with something “easy,” Eric. Tell us about yourself. Did you always know you wanted to be a teacher?

It’s a heck of question: What do you do with your life? As a kid, my parents always taught me to try and help people—that you find a place where there’s a need, and you try to fill it. Growing up I spent a lot of time trying to figure out what that place would be for me.

I was raised upstate in the Albany area and went to high school just outside of Rochester. I really liked history and began thinking about teaching it someday. But one moment that sticks out most was in my senior year of high school. I was in a leadership class, and we were having a discussion about the disparity in quality of education available in the city of Rochester and in the suburbs where we lived. I vividly remember a classmate who made the argument that city graduation rates were so much lower than ours because “those kids are all lazy.” I was infuriated. What she said was obviously wrong, cruel and racist, and I told her so. But in the ensuing argument, what frustrated me was my inability to provide an answer. Why were city graduation rates so much lower than suburban rates? That question would sit with me; gnaw at me long after that class ended.

In college at the University of Rochester, I continued to think about education and the roots of inequality in our country as I studied political science and history. Going into my senior year, I participated in Rochester’s Urban Fellows program, which featured workshops on the history, politics, demographics, and sociology of the urban systems in Rochester and around the country. I had an internship at the mayor’s office where I did research to help launch a city-wide literacy initiative targeting preschoolers. This experience helped me begin to understand the root causes and consequences of the achievement gap.

As a college senior, I was increasingly focused on teaching in an urban setting, but wasn’t sure which path was best. Then I had a conversation with a former TA of mine who was in her first year as a TFA corps member in New Orleans. I remember her reaching out to me and telling me that it was the hardest thing she had ever done, but that she would do it all over again in a heartbeat.

That was the first time it felt like someone was honest with me about the challenge ahead. So I hung up the phone and completed my application for Teach for America. I was placed in the Bronx in 2007 and knew from the start that education was the right place for me.

What have you learned in your time with AF and what do you feel is preparing you for the years ahead?

I have learned so much during my time at AF. Who I am compared to two years ago—forget when I started here in 2009—I’m a completely different teacher. Here at AF, I know that not only will I be pushed to be my best but I will also be given the support and opportunities to get better. All you want to do is be good enough for your kids.

I think that one thing missing in this conversation—the charter school conversation—is that we don’t talk much about how much has been done to develop our teachers as professionals. Professional development at my first school in the Bronx versus what I’ve received here, it’s like we are comparing apples to car tires. It’s not even close. That’s a big reason why I stay here and why I will continue to stay here. 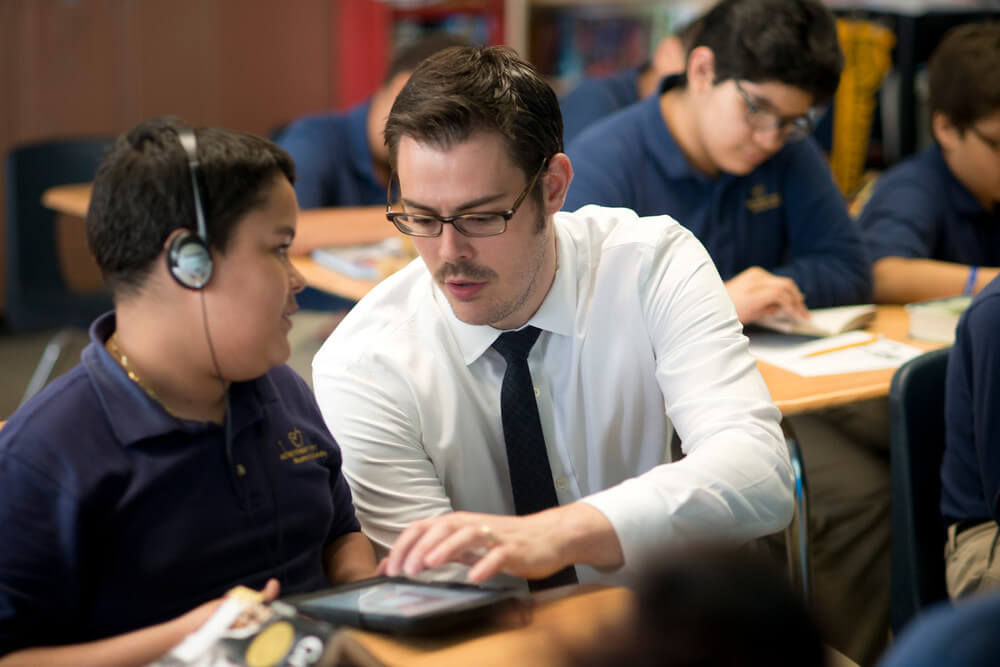 What is the best memory you have of teaching? Do you have a favorite student?

I’ll give you a lame answer: my best memory is all of them—it’s every single one. If I had to narrow this down to one student, I think one of my all-time favorite students is Julius*. When I first came to AF Bushwick Middle, it was his first year here. For 5 of the 6 years he spent at our school, I taught him in some capacity, from phonics to guided reading, literature and even basketball. He came in at a K/1 grade reading level, but is such a bright kid. And it infuriates me because I have his sister now, and she came into our school having earned a 4 on the 4th grade ELA state exam. Julius came in not being able to read. The only difference is she went to AF Bushwick Elementary and he didn’t. He’s a really smart kid, it’s just that no one taught him how to read in his elementary school.

I think back to when I was in school—I was very successful, but when I hit a wall in math in high school calculus, I dropped it. Another example, I was going to take A.P. English, and I had to read a really tough book called Silas Marner. For the first time in my life, I had a text that was immensely challenging for me to read. So I didn’t. I dropped the course. I quit.

And yet that was what Julius faced every day at school—challenge. But unlike me, he never quit. I admire him greatly and couldn’t be prouder of the hard work he put in and the progress he made. I’ll never forget sitting with him as he read Lord of the Flies aloud to me as an 8th grader. He stayed with it; he kept going. And he’s not the only one.

Don’t you love it when teachers end up learning even more from their students? Wow. Changing directions, I’ve heard you talk a lot about your basketball team. What drives you as a coach?

We talk about character and how important it is for kids to build character skills in addition to academic skills. We talk about grit, hard work, teamwork, optimism, and I think to myself, “Where did I learn those?” I didn’t learn them with a pencil in my hand; I learned them when there were 10 minutes left in practice, and we’re doing sprints. I learned them when I thought I couldn’t do it, but I persevered with my teammates, when we were down five points with 30 seconds left but we kept going. Talk about optimism. Stay positive and you never know what can happen.

What does it mean to be a part of a team?  It’s a foundational experience—you are a part of something bigger than you, and you have to be selfless. You have to be responsible. When you mess up, it doesn’t just affect you—it affects your whole team.

These values and so many more, I learned playing sports but was able to transfer them into academic settings. I think of moments when I had a massive paper in college, and I doubted whether I could do it.  And then I would take a deep breath, gather my books, a cup of coffee and grit through it in the library.  That’s the goal for our players as well—to build the mental character habits on the court that are absolutely essential for their academic success in a desk. And when we do that, the character messages of our school will resonate far deeper because students have had experiences where they’ve been tested and persevere.

What advice would you give to a first year teacher?

First, know becoming an effective teacher is a long process that takes years. Nobody walks in on Day One knowing how to do this.  I struggled for years early in my career to simply get students to sit down and listen, let alone become exceptional readers and writers. There are so many challenging skills to figure out and then seamlessly weave together. If you try to figure it all out at once, you will quickly find yourself overwhelmed. Along with your coach, find that one aspect of teaching to focus on and relentlessly work to get that thing right. Then move on to the next thing. Step by step.

Second, BE A SPONGE. Find the strongest teachers in your school and go watch them. Constantly. It is without a doubt the number one way I have grown and continue to grow as a teacher. Ask your coach for videos of teachers from other schools, other networks, or go visit. It’s impossible to get good at this unless you have a vision for what excellence looks like in execution.

Third, find something awesome about every single kid you teach. Even the students who challenge you the most, you’ve got to find that thing. Find it and then let ’em know. We demand so much of students, and they are all capable of great things. But they have to know that we believe in them and genuinely appreciate them. They are everything.

They are! Thanks so much for sharing your story with us, Eric!