No Room for Debate: Our Kids Belong 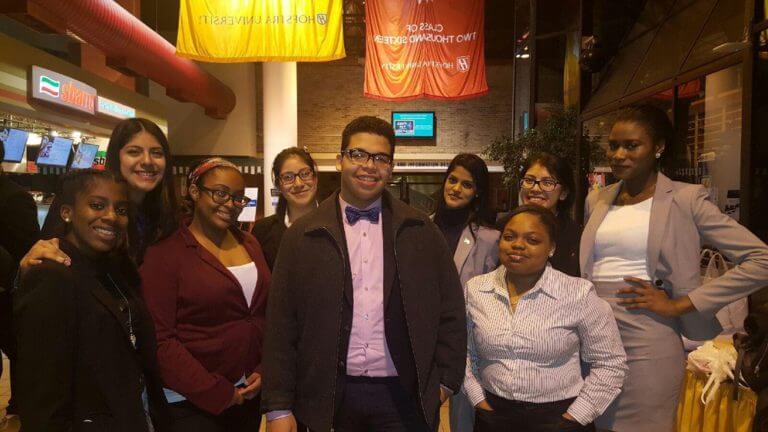 It was late Saturday evening, and the kids had been competing since 8 a.m. We had finally paused for a dinner break at the Student Center of Hofstra University, host to the 2016 New York State Speech & Debate Championship Tournament. With the exception of the two students headed to Nationals, this tournament was the “last hurrah” of our competitive season, which had kept us busy nearly every weekend since the end of September. We were so proud to bring nine students to States this year, ranging from freshmen to seniors, representing the various speech categories of Declamation, Extemporaneous Speaking, Original Oratory, Oral Interpretation and Student Congress.

Students were still in their suits, looking sharp as ever, which is why it especially stung when junior Esther pulled me aside and told me that one of the white coaches had just turned to her in the cafeteria and asked if she worked there. An adult. A COACH.

It didn’t matter that Esther was still wearing her suit. She, like so many of our students, had already gone through a day as the only “fill in the blank” in the room—Esther, the only Latina competing in Extemp, Adia, the only black girl competing in Extemp, and Riann and Tia, some of the only women of color in Student Congress. As if it wasn’t tough enough to spend 12 hours at the State Championship seeing no one else who looks like you, to end the day being confused for “the help” must’ve felt like a slap in the face.

I work with some of the most resilient young people in the world, so it did not surprise me one bit when Esther handled the situation with grace and strength. But I sure didn’t. The audacity of this woman to assume that our kids—our extremely committed, resilient and brilliant kids—could only have been in that room if they were there to serve others was outrageous and insulting to Esther’s and the team’s accomplishments.

An hour later, not only Esther but half of the team had advanced to quarter-finals, a historic first for our program at AF Brooklyn High.

Our committed, resilient and brilliant students are changing the face of Speech & Debate on the state and national circuit. In just a few weeks, Esther travels to Lexington, Kentucky and Chicago, Illinois to compete in the elite Tournaments of Champions, and then over Memorial Day weekend, she accompanies her sister Ariella (a senior heading to Wesleyan in the fall) to compete in the National Catholic Forensics League National Championship in Sacramento, California. And I couldn’t be more proud of all of them for succeeding in the wake of such racist and sexist assumptions.

There have been so many moments in my nine-year career of coaching Speech & Debate that have changed my life, but that moment in the Hofstra cafeteria was the moment when I resolved that I would do everything in my power to make sure Esther and her teammates achieve the kind of victories that other programs have taken 25 years to achieve. Soon. Now. We don’t have time to waste. Together, we can support our students as they show the world that people of color not only belong, but can also re-shape the world of Speech & Debate. Let’s do this.

To hear more about the role of race in the world of Speech & Debate, check out this podcast from Radiolab.