Growing Up Hispanic: The Dangers of "Covering" 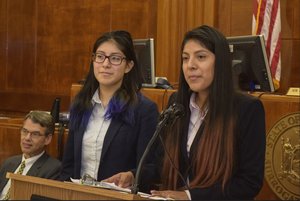 As part of their Hispanic Heritage Month celebration, The Cervantes Society of the Courts of the State of New York invited AF Brooklyn High senior Ariella, along with her sister Esther, to speak. Below is an excerpt of Ariella’s remarks on her experiences and observations.

Growing up in New York City and being Hispanic becomes difficult as time goes on. We may start to lose our identity and roots due to being constantly immersed in American culture. This leads to people covering their culture. I noticed this started happening to me.

When I was little, I looked up to Ariel the little mermaid, not only because she shared part of my name but because she was a mermaid. I mean, who wouldn’t want to be a mermaid? Sure, Cinderella, Belle and Snow White were beautiful princesses, too, but Ariel had the best of both worlds. She was a princess and a mermaid. To top it all off, she ended up marrying a prince! But if you actually look into the story, there is a troubling moral behind it. She was willing to give up her beautiful mermaid tail for ordinary human legs, because she was afraid of being rejected by Prince Eric. Although Ariel completely changed her mermaid tail to human legs, it isn’t that easy for people to just change who they are. But that doesn’t mean they don’t try.

In his book Stigma, sociologist Ervin Goffman points out that “persons who are ready to admit possession of a stigma…may nonetheless make a great effort to keep the stigma from looming large.” He calls this phenomenon “covering.” Almost everyone “covers” – even one of America’s strongest presidents: FDR. He was known for helping America after the great depression. However, what few people know is that FDR became paralyzed at the age of 39.When FDR had meetings with his advisors, he often positioned himself behind a table. He wanted them to be focused on his presidential qualities, not his disability. Similar to FDR, thousands of people “cover” today essential parts of who they are, including their culture, their sexuality, and their gender. In order to understand “covering” we’ll consider Ariel’s transition from being a mermaid to a human and how it is actually part of your world.

After Ariel exchanged her beautiful mermaid tail for legs, she had to adapt quickly to being human, and it wasn’t always easy. Similarly, some cultures have to adapt to American identity. America is made up of tons of different cultures, which is why some call it the “melting pot” of the world. Along with the many cultures, hundreds of languages are spoken. According to the U.S census of 2011, there are more than 311 languages spoken throughout America. Yet sometimes these cultural differences are looked down upon. Gloria Anzaldua, an acclaimed Chicana feminist and scholar, remembers in How to Tame a Wild Tongue that her teacher reprimanded her for speaking Spanish during recess. The teacher exclaimed “If you want to be American, speak ‘American.’” When the teacher referred to speaking “American” she meant speaking only English. Although America prides itself with being culturally diverse, some people want to diminish it. Anzaldua faced the same experience at Pan American University when she and other Chicano students were required to take two speech classes. She concludes that their purpose was to get rid of their accents. Anzaldua was experiencing the pressure to “cover” her Latino culture. And she is not the only one.

When Ariel got her human legs, she had to give up her voice. Similarly, different cultures give up their languages or behaviors to be accepted by society. We have to be aware of putting the same exact pressure on people today to cover their language and to cover their culture, instead of celebrating them.